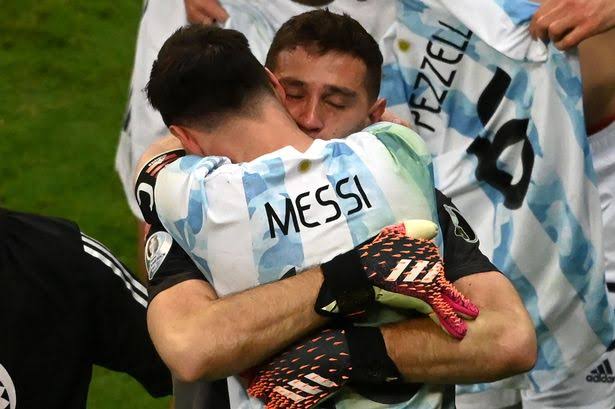 After Argentina’s victory over the Netherlands, Lionel Messi went straight over to congratulate Emiliano Martinez, rather than celebrating with the rest of his teammates.

Argentina defeated the Dutch in a shootout to advance to the semi-finals, where they will face Croatia, who defeated Brazil earlier in the day. Nahuel Molina and Lionel Messi scored to give Lionel Scaloni’s side a two-nil lead, and the South Americans were cruising into the last four.

Wout Weghorst, on the other hand, sparked a sensational late comeback from the bench, scoring twice, including the equalizer in the 101st minute to spark jubilant scenes. Weghorst’s goal was enough to send the game into overtime, but the extra 30 minutes weren’t as entertaining as the first half hour.

Lionel Messi delivers his verdict on the Argentina-Netherlands referee after 15 yellow cards were shown.
As the tie went to penalties, neither team could be separated, and Argentina emerged victorious. Virgil van Djik and Steven Berghuis missed the Dutch’s first two penalty kicks, but Messi and Leandro Paredes converted to give Argentina complete control. Lautaro Martinez would book the White and Sky Blue’s place in the next round, as they won the shootout 4-3.

After Martinez’s penalty kick, the Argentina team rushed over to join the Inter Milan forward in celebrating, who had stormed over to the corner and performed a knee slide. Messi, on the other hand, chose to go the other way and approach Villa’s Martinez, who burst into tears.

Martinez had saved twice in the shootout, and Messi thanked him by tapping him on the back of the head before giving him a heartfelt hug. Substitute goalkeeper Geronimo Rulli also appeared to approach Martinez and congratulate him on Argentina’s semi-final victory.

Messi then ran over to the Argentina fans to celebrate, receiving a raucous reception as he threw his hands in the air and hugged the rest of his teammates. In addition to the goal, Messi provided an outstanding assist for Molina’s opener, slipping a delightful no-look pass through the Dutch defense before the midfielder slotted home.

Former Manchester United defender Rio Ferdinand praised Messi’s pass on the BBC. He stated: “The pass defies gravity. It’s a fantastic pass; it had to be flawless, and it was. Once he gets the ball, his first touch is fantastic, and the way he separates himself from Ake, and how he sees this pass, Blind has to get inside Molina. The pass was absolutely magnificent.”

Alan Shearer continued: “”You can talk about the pass all you want, but Molina is the guy who gets the ball back and wins it,” he said. Just look at his first touch, the pass is incredible, the vision is incredible, the weight of the pass, everything except watch how Molina’s first touch takes it away from the defender, if Van Dijk has to get in the way, he has to foul him. It’s a fantastic finish.”