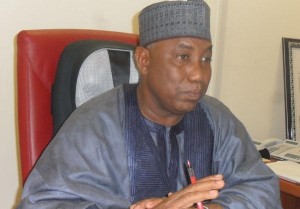 Senator Kabiru Gaya ( APC, Kano South ) was Kano State governor in the Third Republic under the platform of the defunct NRC. In this interview with Adesuwa Tsan, he speaks on why the Senate is rejecting extension of emergency rule in Adamawa, Borno and Yobe, Governor Kwankwaso’s presidential ambition and why the fight against insurgency has been failing.

There’s stalemate in the Senate debate on President Goodluck Jonathan’s request on the extension of state of emergency in Adamawa, Borno and Yobe States. Would you support the extension eventually?

Well, I appreciate your question but it is not a matter of support or not; it is a matter of assessing correctly the situation of things happening in that location. You remember this is the third time they are asking for extension and even if you send your son to school or give a person an assignment, if he fails the first time, you ignore it; you send him back for the second time. If he fails, you send him back and for a third time, he failed woefully and now you want to send him again? I mean, it is just like a doctor giving a wrong medicine to a patient and the patient hardly recovers from the ailment yet that patient comes back to that killer doctor. I mean, these are the scenarios we are presented with. You see, with the last request, not this one, the last request granted in May this year, remember we didn’t agree on the same day.

We debated and invited service chiefs. They came and told us that they needed the extension as a tool to fight the insurgency and that let us be rest assured that in three months, this issue will be entirely over, there will be peace, there will be stability in those regions and even beyond and that if we don’t give them that tool to work, their hands are tied.

We knew that even at that time there was progress, the civilian JTF, in collaboration with the military were working hard, they had sent the insurgents out of Maiduguri town and maybe out of Yobe town and they scattered to Sambisa forest. So, the military knew where these people were; they were supposed to have gone there to attack them in the village before they disperse to other villages where people were and you cannot even identify them, that was not done.

We also asked them what the other problem was and they told us it’s about money and you remember recently, we granted $1billion apart from almost N1 trillion which was put in the national budget for security. Yet, because we wanted them to stop killing our people, Nigerians, both Musilims and Christians, we agreed on that even against our wishes because the prime objective in this country, for any leader, whether president or governor or local government chairman, the main responsibility is to maintain peace in his constituency and if that prime objective is not there, it means no progress, nothing will work out.

When the APC was formed, Nigerians believed the party would challenge the ruling Peoples Democratic Party effectively in the 2015 general election but there are many presidential aspirants. What’s happening?

That is democracy. For example, before the different political parties that formed the APC came together as a mega party, where some political parties were not used to conducting primary elections; instead they would impose a consensus candidate as their presidential flagbearer and at the end of the day, they would lose the election. In the case of the PDP, they conducted primary elections and subsequently won the presidential election. Former President Olusegun Obasanjo and the late Umaru Musa Yar’Adua were produced through that democratic process. However, the story has changed now as the PDP had started to borrow from what the ANPP did and lost elections. They are now imposing a candidate against the wishes of so many silent people who cannot speak out but when it comes to voting, they will express their will! That is why the government has problems and is employing means and ways to perpetuate the current leadership in power beyond 2015. Let us start with the issue of constitutional amendments. Remember the President brought to the National Assembly, a bill seeking powers for the President to initiate a new Constitution. If that had scaled through; that means the country would start a new democratic arrangement afresh, on a clean slate. For instance, my self, Senator Buka Abba Ibrahim of Yobe and others were beneficiaries of the 1999 Constitution. We operated with the 1979 Constitution as governors in 1991. But in 1999, a new Constitution came up, Buka Abba Ibrahim, Jolly Nyame (Taraba), Abubakar Audu (Kogi) who were former governors contested again in 1999 under a new Constitution and they won. However, after the first term, they wanted to contest again in 2003 but there was a protest which made some people to go to court in order to challenge their alleged plan to contest after two terms in office, contrary to the provisions of the Constitution.

Are you saying that the APC is warming up to take over in order to correct the situation?

I am not trying to introduce politics into the situation but we have to tell ourselves the truth. Governor Kwankwaso was a Minister of Defence, and is now a serving governor. Before now, he was a legislator, and rose to become a Deputy Speaker of the House of Representatives. He was also Special Adviser to the President on Dafur. He was a member of the Niger Delta Development Commission, (NDDC) hence, he has the credentials. He is a young man too. He can work for 18 hours a day. I believe that all our elders and leaders in the APC should support him. If you look at the situation in other countries, their citizens are going for young people to become their president. In America, Bill Clinton and Barack Obama, for instance, were young men who became president having youthful hair but grew grey hair in power because of mainly the external problems that their country was facing. We won’t mind if Kwankwaso is elected president and has to grow grey hairs in the course of tackling Nigeria’s internal problems.

You have been a lawmaker for eight years now; why do you want to become a governor? What are you going to do differently from what your governor is doing now?

This brought a lot of development. I left the Kano Government House about 23 years ago and yet, God has made me to be relevant in politics. This means that there is something that people see in me. Up till today, some of the projects that I executed still speak for me and people are happy.