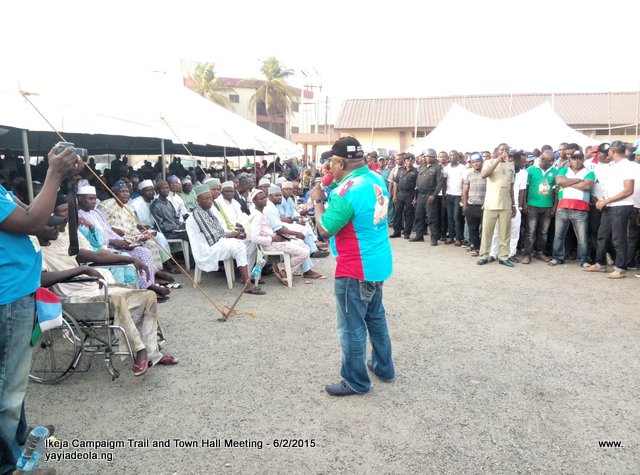 The chairman of the House of Representative Committee on Public Accounts and Senatorial Candidate of APC for Lagos West Hon. Solomon Adeola have faulted the forensic audit report by Price Water Coopers on the missing NNPC $20billion as submitted to President Goodluck Jonathan and commented on by the Auditor General of the Federation, Mr. Ukura Samuel

Speaking at a town hall meeting in Ikeja as part of his campaign for Lagos West Senatorial District, Hon. Solomon Adeola said the Auditor General has no locus standi to comment on the audit report as he was not the one that appointed the firm of Price Water House Coopers in the first place and would not have been privy to the terms of reference and rules of engagement given to the auditing firm adding that Public Accounts Committee of the House of Representatives is going to summon the auditing firm on the details of their report when the House resumes after the elections.

“The Auditor General did not appoint the auditing firm that submitted the report. What he gave the public in his press conference is a summarized version of the report and not the full report. We in the House Committee will be requesting for the full report. The firm was appointed by the Ministry of Finance and not the Auditor General ” he stated adding that as far as the House is concern the report raised more questions that answers to the missing Nigerian money.

“One is not surprised that the Minister of Petroleum Resources, Mrs.  Deiziani Alison-Madueke  has quickly ordered payment of the acknowledged missing  $1.48billion as this look an easy way to bury the issue but Nigeria demand full accountability on this vexed issue” he said.

The APC Lagos West Senatorial candidate told the Ikeja LGA stakeholders that as the seat of the Lagos State Government, they are the most enlighten in Lagos State and should not make the mistake of sending a novice to represent them at the senate adding that with 12 years of cognate experience in legislative business he is best placed to represent them at the Senate.