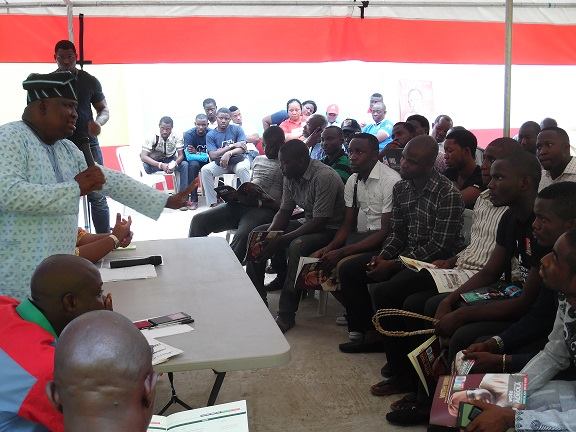 The House of Representatives Committee on Public Accounts and APC Lagos West Senatorial candidate, Hon Solomon Adeola has decried the introduction of violence into ongoing campaign by opposition political party candidates as a way of scaring voters from performing their civil duties of voting for the candidate of their choice.

Condemning the practice when a coterie of support groups from the senatorial district paid him solidarity visits over the weekend, Hon. Adeola regretted that any candidate would include sporadic shooting of guns and machete attacks on people opposed to their candidature or pasting his poster adding that he would continue his campaign based on his track record at the state and federal legislature for the past 12 years as well as his legislative agenda for Lagos West Senatorial District.

“I will never involve in or encourage my supporters to carry out campaign of intimidation of voters with violence in any form particularly shooting sporadically or attacking those pasting posters. It is regrettable that one APC supporter has been killed in Agege and another APC woman was attacked with machete in Ayobo-Ipaja area for posting APC candidates posters on her premises”

He said he will continue to meet with the people and groups to discuss his agenda as representation is about people adding that his campaigns across the district in form of town hall meeting and rallies was aimed at letting the people know who is going to represent them as well as discuss the what inform them what they should expect from him at the Senate.

He said the senate as the highest legislative body requires cognate experience with consideration giving to ranking among senators adding that Lagos West as the largest senatorial district in Nigeria cannot afford to send a learner or first timer to the senate.

Earlier all the groups including National Association of Nigerian Students(NANS) LASU, Araromi Youth, Association of Disabled Persons, Oshodi –Isolo as well as Lagos State Association of the Deaf all said they came to declare their support based on his track records in Alimosho where he has been a representative at both state and federal level.

Nurudeen Temilola, the President of NANS LASU promised that his association will campaign for him among the over 5000 students spread across four campuses  adding that they were in his office to collect campaign materials.