Secret-realite– Batékés Plateaux area in Central Africa, by the accounts of several witnesses- in the early 20th century- is the last refuge of prehistoric animals, living nearly 65 million years after the Jurassic era that marks the extinction of the dinosaurs on earth.

According to descriptions from several sources, this would be the dinosaurs of the sub-order of sauropods that have managed to survive the great and sudden disappearance of his species.

Neglected by paleontologists who favored North Africa in search of dinosaur fossils, it would seem, according to some scientists, that Central Africa is the last refuge of the authentic dinosaurs living on earth.

Called Mokele Mbembé which means “one who stops the flow of a river” in the Congo and in Gabon Nyamala, the animal is described as measuring nearly 10 meters, with a reddish gray color, it would have a small head like a snake but with a peak with a very long neck very flexible but provided with a body as big as an elephant, and also possess four legs and a muscular tail.

Pygmies of Gabon and Congo, who had made the description had said that this monster was a vegetarian and have presented all the Malombo (Landolphia) as its favorite food. Although herbivore, the animal was deemed particularly dangerous, it should not get too close to him because, to protect its territory, he overturned the canoes of a single phone line and killed the occupants without nevertheless seek to devour them.

Shortly before the First World War in 1913, is mentioned for the first time, the possibility of existence of a living fossil in Congo Brazzaville, with Baron von Stein zu Lausnitz natives who reported the presence of an unusual animal in the region of Likouala.

French missionaries who are returning to Congo tickle the minds of scientists, speaking this time in the presence of footprints in the forest of a huge animal, but that could not be an elephant because of the three fingers which were provided feet, which is the very characteristic of the dinosaurs.

The animal, according to the indigenous peoples, is aquatic and habituates rivers, streams and other water points, so he would not live in the rainforest, which is precisely the case in the region of Likouala where the presence of the beast was the most reported.

Several expeditions were then sent to the Congo, specifically to Lake Tele in the same region of Likouala, to have irrefutable proof of the existence of prehistoric monster.

James Powell, who initiated the first real expedition, heard about the animal for the first time in Gabon where a sorcerer named Fang Obang Michel recognizes the illustration of a diplodocus the animal he claims to have seen out of a river in 1946. The herpetologist became interested in this strange animal and collects all the stories about him in this region where it came from originally, studying crocodiles living in tropical Africa.

This is after the study of stories he had collected in Gabon about Mokele Mbembe, the herpetologist James Powell went into partnership in 1980 the biologist Roy Mackal to explore the swamps of Likouala. This first expedition was an opportunity for the biologist, initially skeptical, to verify the information and listen itself evidence of Aboriginal who said they saw the animal and described his lifestyle.

Leaving the United States, Roy Mackal returned a second time in 1981 in Congo decided well, this time to see the animal in her eyes. He took the direction of Lake south of Likouala TV where he was reported that Mokele Mbembé was killed unfortunately the weather was particularly bad that made him turn back, but it does not, however, returned empty-handed.

Footprint of the creature

Indeed, during this expedition, the biologist Mackal, photographed primarily a track showing the passage of an animal of nearly two meters high and dragging behind him a huge cock. Then, during his expedition, at the elbow of a river south of the city of epend, the sudden plunge of a large creature in the water caused a wave of 18 inches (about œ meter) high hitting the canoe Explorer. The same year, the engineer Herman Reguster, which also went to Lake Télé, said that during his exploration, he observed in the presence of his wife, a long neck ending in a graceful little head similar to a snake coming out of water and the beast, after having looked, was gradually sliding into the water left. He added that towards the end of his expedition, his team would have heard the roar from a huge animal fell with a crash into the swamp next to their camp.

Another expedition took place in 1983, still within the Lac Tele, led this time by the Congolese biologist Marcellin Agnagna assured that he observed, and for twenty minutes at a distance of 250 meters, the precious animal, the enthusiasm aroused by the sight of the monster as described by the natives would have led to a technical clumsiness prevented him from filming the beast to acknowledge his existence. Some photographs from one of Roy Nugent in 1993 and another in 1992, this time from a Japanese documentary film crew taking over Lake Tele is far too vague for one can say that this is indeed the famous Mokele Mbembé. 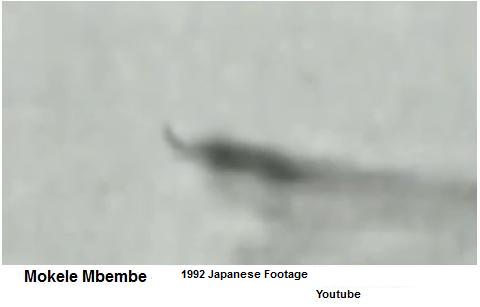 The existence of the prehistoric animal has never been proven to date irrefutably since different evidence purportedly attest to the truthfulness of explorers are all tinged with subjectivity. Critics of the existence of a living dinosaur in Central Africa, the dinosaurs died in the late Cretaceous, the Jurassic era and with the climate and ecological change that occurred at that time, the dinosaurs n ‘ had more than enough food and therefore all died of hunger. According to them, the rhinos would be a Mokele Mbembé since some pygmies, who had been shown illustrations to enable them to identify the animal they claimed to have seen, had nominated among the drawings. Similarly, expressed the erroneous theory that the sauropod dinosaurs lived in swamps because qu’affectionnant particularly live in water.

They also argue that an animal as large as a sauropod dinosaur is supposed to leave wide paths in its path but curiously discovered by Mackal fingerprints are found in very small paths. Even the description of the dinosaur is problematic because, unlike what is said in the reports of Mackal Agnagna and it is not scientifically proven that sauropod dinosaurs is marked with a crest. According to these scientists, accepting as authentic the fingerprints found by the missionaries, it is more likely to be one of the hallmarks of a mammal may be a reptilian race of giant Varan still unknown to man, but certainly not a dinosaur.

Although no clear evidence of the existence of this prehistoric monster has been made to date, it is not scientifically impossible for this creature to be truly alive in Central Africa. This, because of the consistency of the descriptions of the animal and its feeding behavior by the Pygmies of two countries that have never met but also the presence in West Africa, Ashanti weights for weighing gold and appear to represent the sauropod dinosaur. And it would not in fact the first discovery of its kind, since in 1938 it was discovered a living coelacanth then previously thought to exist only in the state fossil.

Although the possibilities are slim, it is not impossible that the trays Batékés, Central Africa, may be the last refuge of prehistoric animals that managed to defeat the laws of nature that had sentenced to death. The discovery of a dinosaur alive in our time, revolutionize the scientific world, upsetting all theories propounded since the demise of the dinosaurs but also excite the curiosity of all.

Unfortunately it’s a safe bet, if no evidence is indisputable discovery that the Mokele Mbembé has not found its place alongside the myths such as the Loch Ness Monster or the Yeti. So Mokele Mbembé myth or reality?

VIDEO
The caption video was made in 1992 by a Japanese documentary film crew. Article source{french}