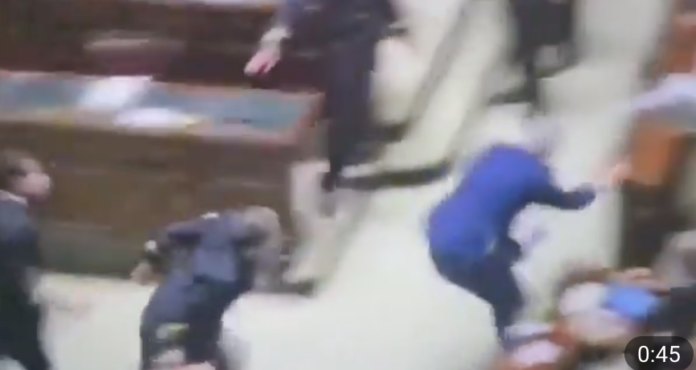 A session of the Italian Parliament has turned to chaos after a group of right-wing MPs protested the country’s ‘Green Pass’ Covid vaccine cert system, which is soon to become mandatory for accessing most public venues.

The protest was held by members of the Brothers of Italy (FdI) party in the parliamentary chamber on Thursday. Footage from the scene shows the MPs rushing to the center of the chamber, shouting and waving placards reading ‘No Green Pass.’

One of the MPs was promptly chased away by his opponents, however the FdI still managed to continue its demonstration, prompting the speaker to suspend the session. The protesting MPs were booed by their political opponents who support the vaccine certificate system.

The incident unfolded shortly before the legislature was set to vote on a motion, launched by the FdI, questioning whether the recent decree to expand the Green Pass was constitutional. After order was restored and the session continued, the motion was shot down, with 51 votes in favor, 288 against, and a single abstention.

Italy’s Green Pass was launched in late June. The certificate is issued for people who have been vaccinated against Covid-19, have tested negative in the previous 48 hours, or have recovered from the disease.