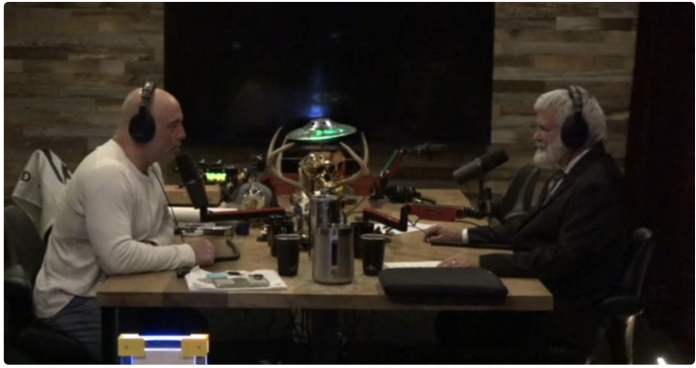 Joe Rogan’s much-anticipated podcast interview with Dr. Robert Malone, the Inventor of mRNA vaccine technology, dropped on Friday – and sure enough, it did not disappoint.

Dr. Malone has been speaking out against the public health bureaucracy’s Covid-19 response and the experimental vaccines for months, proving himself to be one of the most reliable sources of factual information throughout the manufactured pandemic.

During his interview on JRE, Dr. Malone dropped bombshell after bombshell on the corrupt establishment – From public officials covering up known early treatments – to serious conflicts of interest between the medical elites and those who are supposedly holding them accountable – all the way up to federal cash bribes to healthcare facilities in exchange for Covid death receipts – he did not hold back.

Hopefully, we are going to stop them before they take our kids.”

“They are lawless. They completely disregard bio-ethics. They’ve broken all the rules that I know, that I’ve been trained on for years”. pic.twitter.com/mxG7phVhIJ

It’s no wonder Twitter PERMANENTLY banned him in a shameless attempt to get ahead of this interview.

JUST IN: Twitter PERMANENTLY Suspends mRNA Vaccine Inventor Dr. Robert Malone After Tweeting About the mRNA Vaccines – The Day Before He Goes on with Joe Rogan

Granted, much of what Dr. Malone revealed to Rogan had already been reported by outlets like the Gateway Pundit, but the massive audience who listens to the JRE experience will be hearing it for the first time.

An awestruck Joe Rogan surely got the message, as he put it to Dr. Malone:

“That is crazy, That is so crazy to even hear. I think we are at a 45-degree downward angle heading into a mountain, I really do.

The full interview is over 3 hours long, so here are a few of the best and most important parts – courtesy of Twitter user MythinformedMKE.

The entire podcast can be found here.

First up, Dr. Malone breaks down the federal government’s cash-for-Covid “death benefits” for hospitals, which incentivizes healthcare providers to artificially inflate the infection and death count.

Unbelievably, hospitals can receive as much as a $30,000 bonus for placing a patient on a ventilator, and they are eligible to receive even more cash if the patient is declared dead with the virus, regardless of if it contributed to their death or not.

In short, the healthier the patients get – the less bonus money they receive. Seems a little backward, no?

“The numbers are quite large. There is something like a $3,000 basically death benefit to a hospital if it [a patient admission] can be claimed to be Covid.

There is a financial incentive to call somebody covid positive. The hospitals receive a bonus from the government – I think it’s like $3,000 – if someone is hospitalized and able to be declared Covid positive.

They also receive a bonus – I think the total is something like $30,000 incentive – if somebody gets put on the vent [ventilator].

Then they get a bonus if somebody is declared dead with Covid.

The CDC made the determination that they were going to make a core assumption – if [someone is] PCR positive, and [they] die, that is death due to Covid.

So, the extreme example just to show the absurdity: if the patient comes in with a bullet hole to the head and they do a nose swab and they come up PCR positive, they’re determined to have died from Covid.”

If a person is killed by a gun shot wound and had COVID, the hospital would consider that a COVID death. pic.twitter.com/oOptIgHIAY

Specifically – Thompson-Reuters. The outlet has become the primary ‘fact-checker’ for large platforms like Twitter, which have been cracking down on so-called ‘medical misinformation’ – especially concerning the experimental vaccines.

The only problem is that Pfizer and Thompson-Reuters have shared corporate ownership, which is a problem when a large majority of the information they are verifying as true or false – and therefore able to be disseminated among the masses – is directly tied to both of their bottom lines.

“Thompson-Reuters is tied to Pfizer, they have common corporate ownership and they are the ‘fact-checker’ of Twitter – they are integrated.

So, Thompson-Reuters is making the decision, which has connections to Pfizer, about what information will be allowed to be discussed on Twitter.”

This represent a serious conflict of interest as they help determine what medical information is allowed to be heard and discussed. pic.twitter.com/TzSwpRWhj0

Next, Dr. Malone touches on the ‘natural immunity’ discussion. As has been proven by volumes of data – both over the years and even specifically related to Covid – individuals who recover naturally and acquire natural immunity are much better protected than if they were to just take a manufactured vaccine – especially when it comes to these experimental mRNA vaccines that have shown a sharp decline in immunity that eventually will leave the individual more susceptible to catching the virus than their unvaccinated peers.

Pandemic of the Vaccinated: Two Studies Show New Evidence that Covid-19 Vaccines “Cause More Illness than They Prevent”

According to Dr. Malone, there are also now concerns that those with natural immunity are actually more likely to experience an adverse reaction from the vaccines than those who have never been infected with Covid.

“It’s very clear that people who have natural immunity have a much higher risk factor for this whole spectrum of adverse events if they get jabbed.

There is a number of things here that are not supported ‘by the science’ – to put it gently. [But] since we are on the Joe Rogan show, I can speak freely, it’s nucking futz. This is just wrong.”

Joe Rogan and Dr. Robert Malone discuss how people with natural COVID immunity are at a higher risk of adverse events from the vaccine. pic.twitter.com/faAXiHMuL1

One of the most shocking bombshells from Dr. Malone came when he was discussing the Uttar Pradesh province in India, which has has some of the greatest success against Covid-19 out of any area in the world thanks to their rapid deployment of early treatment care packages that included several drugs to combat the virus.

Despite the success of the early treatments that were distributed across the province with the help of the WHO, the drugs used in the care packages have not been officially disclosed by the Indian government to the rest of the world (although, Ivermectin has been reported to be one of the drugs that were used).

UPDATE: 71 out of 75 Districts in Uttar Pradesh, India – Its Most Populated State – Reported No Covid-19 Cases in 24 Hours After Implementing Ivermectin Protocol

According to Dr. Malone, India’s decision was apparently made at the behest of Brandon, who personally visited with the country’s prime minister just before they decided not to disclose the treatments.

“Uttar Pradesh, as you know, has crushed Covid. It’s not clear what are the drugs [they used]. What we do know is there was a decision made [as] the virus was just ripping through Uttar Pradesh, which has the same population as the United States.

The composition has not been formally disclosed. It was done in coordination with the WHO, and whatever was in those packages was rumored to include ivermectin.

But there was a specific visit of Brandon to Modi [the PM of India] and a decision was made [by] the Indian government not to disclose the contents of those packages that were being deployed in Uttar Pradesh.

They [the medical packages] are still there, and Uttar Pradesh has flatlined right now. The rest of the world is yelling about Omicron and hospitalizations, but Uttar Pradesh is still flatlined in terms of deaths.

There was a meeting between Brandon and Modi. All I know is that immediately afterward there was a decision not to disclose the contents of what was being deployed in Uttar Pradesh.”

Joe Biden met with Narendra Modi and a decision was made to not disclose the contents of the treatment. Why? pic.twitter.com/PG9AkhIHvG

It was never about saving lives. A similar issue about the concealment of working prospective treatments for Covid-19 was raised earlier this month by the world-renowned cardiologist Dr. Peter McCullough when he sounded the alarm over the US public health bureaucracy purposefully suppressed treatments in order to push the experimental vaccines – also on Joe Rogan’s show.

Finally, Rogan and Dr. Malone discuss the mass censorship of unapproved speech that is ramping up on Big Tech platforms. Rogan blasts Twitter for censoring even the most qualified among us just because they say something that goes against the narrative before turning the mic over to Dr. Malone to discuss his recent ban from the platform and the terrible consequences that arise when crushing free speech and an open discussion.

Joe Rogan questions big tech for censoring “one of the most qualified people in the world to talk about vaccines”Dr. Robert Malone.

Those are just some of the most important highlights of many. Once again, the entire 3+ hour podcast is well worth the listen. The full episode of JRE with Dr. Robert Malone (with video) can be found on Spotify, here.