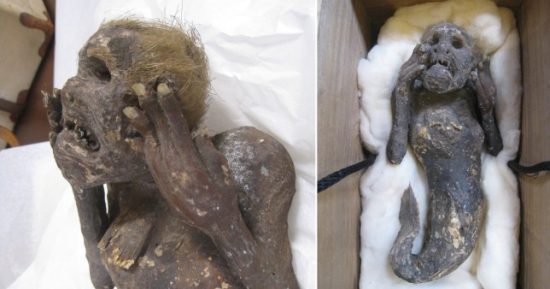 An ancient mummified ‘mermaid’ that supposedly grants immortality to anyone that tastes its flesh is to be examined by scientists.

The creature, with a human-looking face and a tail, has baffled experts for centuries.

It was allegedly caught in the Pacific Ocean, off the Japanese island of Shikoku, between 1736 and 1741.

Now it rests in a temple in the city of Asakuchi.

The creature has its two hands reaching up towards its grimacing face. Hair is still visible on its head and it has the remains of sharp, pointy teeth in its mouth.

Researchers from the Kurashiki University of Science and the Arts have taken the mummy for CT scanning in a bid to unravel its mysteries.

Hiroshi Kinoshita of the Okayama Folklore Society, who came up with the project, said the mummy could have religious significance.

‘Japanese mermaids have a legend of immortality,’ he said.

‘This ‘Yao-Bikuni’ legend is also preserved near the temple where the mermaid mummy was found.

‘I heard that some people, believing in the legend, used to eat the scales of mermaid mummies.’