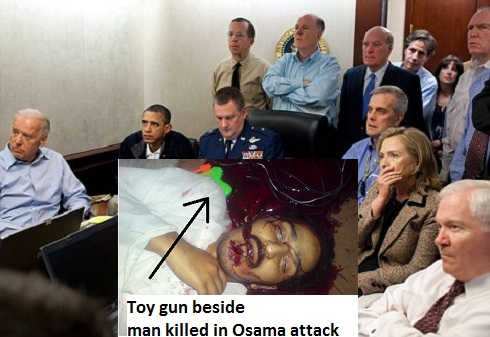 August 29th, 2012
WASHINGTON (AP) — A firsthand account of the Navy SEAL raid that killed Osama bin Laden contradicts previous accounts by administration officials, raising questions as to whether the terror mastermind presented a clear threat when SEALs first fired upon him.

Bin Laden apparently was shot in the head when he looked out of his bedroom door into the top-floor hallway of his compound as SEALs rushed up a narrow stairwell in his direction, according to former Navy SEAL Matt Bissonnette, writing under the pseudonym Mark Owen in “No Easy Day.” The book is to be published next week by Penguin Group (USA)’s Dutton imprint.

Bissonnette says he was directly behind a point man going up the stairs in the pitch black hallway. Near the top, he said, he heard two shots, but the book doesn’t make it clear who fired them. He wrote that the point man had seen a man peeking out of a door on the right side of the hallway.

The author writes that the man ducked back into his bedroom and the SEALs followed, only to find the man crumpled on the floor in a pool of blood with a hole visible on the right side of his head and two women wailing over his body.

Bissonnette says the point man pulled the two women out of the way and shoved them into a corner. He and the other SEALs trained their guns’ laser sights on bin Laden’s still-twitching body, shooting him several times until he lay motionless. Only when they wiped the blood off his face, were they certain it was bin Laden.

Administration officials briefing reporters in the days after the May 2011 raid in Pakistan said the SEALs shot bin Laden only after he ducked back into the bedroom because they assumed he might be reaching for a weapon.

National Security Council spokesman Tommy Vietor would not comment on the apparent contradiction late Tuesday. But he said in an email Wednesday, “As President Obama said on the night that justice was brought to Osama bin Laden, ‘We give thanks for the men who carried out this operation, for they exemplify the professionalism, patriotism and unparalleled courage of those who serve our country.'”

“No Easy Day” was due out Sept. 11, but Dutton announced the book would be available a week early, Sept. 4, because of a surge of orders due to advance publicity that drove the book to the top of the Amazon.com and Barnes & Noble.com best-seller lists.

The Associated Press purchased a copy of the book Tuesday.

The account is sure to renew questions about whether the raid was intended to capture or simply to kill bin Laden. Bissonnette writes that during a pre-raid briefing, an administration lawyer told them that they were not on an assassination mission. According to Bissonnette, the lawyer said that if bin Laden was “naked with his hands up,” they should not engage him. If bin Laden did not pose a threat, they should detain him.

A former deputy judge advocate general for the Air Force said the shooting was understandable according to the orders the SEALS had.

“It wasn’t unreasonable for the SEALs to shoot the individual who stuck his head out,” said the former JAG, ret. Maj. Gen. Charlie Dunlap, who now teaches at Duke University law school.

“In a confined space like that where it is clear that there are hostiles, the SEALs need to take reasonable steps to ensure their safety and accomplish the mission,” Dunlap said.

Related: SEALs slam Obama for using them as ‘ammunition’ in bid to take credit for bin Laden killing during election campaign

Dunlap adds that shooting bin Laden’s fallen form was also reasonable in his legal opinion, to keep the terrorist from possibly blowing himself up or getting a weapon and shooting at the SEALs.

In another possibly uncomfortable revelation for U.S. officials who say bin Laden’s body was treated with dignity before being given a full Muslim burial at sea, the author reveals that in the cramped helicopter flight out of the compound, one of the SEALs was sitting on bin Laden’s chest as the body lay at the author’s feet in the middle of the cabin, for the short flight to a refueling stop inside Pakistan where a third helicopter was waiting.

This is common practice, as U.S. troops sometimes must sit on their own war dead in packed helicopters. Space was cramped because one of the helicopters had crashed in the initial assault, leaving little space for the roughly two dozen commandos in the two aircraft that remained. When the commandos reached the third aircraft, bin Laden’s body was moved to it.

Bissonnette writes that none of the SEALs were fans of President Barack Obama and knew that his administration would take credit for ordering the raid. One of the SEALs said after the mission that they had just gotten Obama re-elected by carrying out the raid.

But he says they respected him as commander in chief and for giving the operation the go-ahead.

Bissonnette writes less flatteringly of meeting Vice President Joe Biden along with Obama at the headquarters of the 160th Special Operations Aviation Regiment after the raid. He says Biden told “lame jokes” no one understood, reminding him of “someone’s drunken uncle at Christmas dinner.”

Beyond such embarrassing observations, U.S. officials fear the book may include classified information, as it did not undergo the formal review required by the Pentagon for works published by former or current Defense Department employees.

Officials from the Pentagon and the CIA, which commanded the mission, are examining the manuscript for possible disclosure of classified information and could take legal action against the author.

In a statement provided to the AP, the author says he did “not disclose confidential or sensitive information that would compromise national security in any way.”

Bissonnette’s real name was first revealed by Fox News and confirmed to the AP.

Jihadists on al-Qaida websites have posted purported photos of the author, calling for his murder.