We’ve long noted that Saudi Arabia is a huge supporter of terrorism.

But the new Saudi king is particularly bad.

King Salman has a history of funding al-Qaida, and his son has been accused of knowing in advance about the 9/11 attacks.

Salman once ran a Saudi charity tied to al-Qaida and has been named a defendant in two lawsuits accusing the Saudi royal family of helping the 9/11 terrorists, one of which the U.S. Supreme Court recently let move forward after years of being blocked by the State Department and the well-funded Saudi lobby.

Plaintiffs have provided an enormous amount of material to source their accusations against Salman. Here’s why his ascension to the throne is not good news, especially as the terrorism threat grows:

• Salman once headed the Saudi High Commission for Relief to Bosnia and Herzegovina, which served as a key charitable front for al-Qaida in the Balkans.

• According to a United Nations-sponsored investigation, Salman in the 1990s transferred more than $120 million from commission accounts under his control — as well as his own personal accounts — to the Third World Relief Agency, another al-Qaida front and the main pipeline for illegal weapons shipments to al-Qaida fighters in the Balkans.

• A U.N. audit found that the money was transferred following meetings with Salman, transfers that had no legitimate “humanitarian” purpose.

• In “Why America Slept,” author Gerald Posner claimed that Salman’s son Ahmed bin Salman also had ties to al-Qaida and even advance knowledge of the Sept. 11, 2001 attacks.

As former CIA official Bruce Riedel astutely pointed out, Salman was the regime’s lead fundraiser for mujahideen, or Islamic holy warriors, in Afghanistan in the 1980s, as well as for Bosnian Muslims during the Balkan struggles of the 1990s. In essence, he served as Saudi Arabia’s financial point man for bolstering fundamentalist proxies in war zones abroad.

As longtime governor of Riyadh, Salman was often charged with maintaining order and consensus among members of his family. Salman’s half brother King Khalid (who ruled from 1975 to 1982) therefore looked to him early on in the Afghan conflict to use these family contacts for international objectives, appointing Salman to run the fundraising committee that gathered support from the royal family and other Saudis to support the mujahideen against the Soviets.

Riedel writes that in this capacity, Salman “work[ed] very closely with the kingdom’s Wahhabi clerical establishment.” Another CIA officer who was stationed in Pakistan in the late 1980s estimates that private Saudi donations during that period reached between $20 million and $25 million every month. And as Rachel Bronson details in her book,Thicker Than Oil: America’s Uneasy Partnership With Saudi Arabia, Salman also helped recruit fighters for Abdul Rasul Sayyaf, an Afghan Salafist fighter who served as a mentor to both Osama bin Laden and 9/11 mastermind Khalid Sheikh Mohammed.

Reprising this role in Bosnia, Salman was appointed by his full brother and close political ally King Fahd to direct the Saudi High Commission for Relief of Bosnia and Herzegovina (SHC) upon its founding in 1992. Through the SHC, Salman gathered donations from the royal family for Balkan relief, supervising the commission until its until its recent closurein 2011. By 2001, the organization had collected around $600 million — nominally for relief and religious purposes, but money that allegedly also went to facilitating arms shipments, despite a U.N. arms embargo on Bosnia and other Yugoslav successor states from 1991 to 1996.

And what kind of supervision did Salman exercise over this international commission? In 2001, NATO forces raided the SHC’s Sarajevo offices, discovering a treasure trove of terrorist materials: before-and-after photographs of al Qaeda attacks, instructions on how to fake U.S. State Department badges, and maps marked to highlight government buildings across Washington.

The Sarajevo raid was not the first piece of evidence that the SHC’s work went far beyond humanitarian aid. Between 1992 and 1995, European officials tracked roughly $120 million in donations from Salman’s personal bank accounts and from the SHC to a Vienna-based Bosnian aid organization named the Third World Relief Agency (TWRA). Although the organization claimed to be focused on providing humanitarian relief, Western intelligence agencies estimated that the TWRA actually spent a majority of its funds arming fighters aligned with the Bosnian government.

A defector from al Qaeda called to testify before the United Nations, and who gave a deposition for lawyers representing the families of 9/11 victims, alleged that bothSalman’s SHC and the TWRA provided essential support to al Qaeda in Bosnia, including to his 107-man combat unit. In a deposition related to the 9/11 case, he stated that the SHC “participated extensively in supporting al Qaida operations in Bosnia” and that the TWRA “financed, and otherwise supported” the terrorist group’s fighters.

The SHC’s connection to terrorist groups has long been scrutinized by U.S. intelligence officials as well. The U.S. government’s Joint Task Force Guantanamo once included the Saudi High Commission on its list of suspected “terrorist and terrorist support entities.” The Defense Intelligence Agency also once accused the Saudi High Commission ofshipping both aid and weapons to Mohamed Farrah Aidid, the al Qaeda-linked Somali warlord depicted as a villain in the movie Black Hawk Down. Somalia was subject to a United Nations arms embargo starting in January 1992.

The board of trustees for the Prince Salman Youth Center, which Salman himself chairs, today includes Saleh Abdullah Kamel, a Saudi billionaire whose name showed up on a purported list of al Qaeda’s earliest supporters known as the “golden chain.” (The Wall Street Journal reported that Kamel “denies supporting terror.”) But as the United States sought to shut down Saudi charities with ties to terrorism in the aftermath of the 9/11 attacks, Kamel and Salman both condemned the effort as an anti-Islamic witch hunt.

In November 2002, Prince Salman patronized a fundraising gala for three Saudi charities under investigation by Washington: the International Islamic Relief Organization, al-Haramain Foundation, and the World Assembly of Muslim Youth. Since 9/11, all three organizations have had branches shuttered or sanctioned over allegations of financially supporting terrorism. That same month, Salman cited his experience on the boards of charitable societies, asserting that “it is not the responsibility of the kingdom” if others exploit Saudi donations for terrorism.

The new king has also embraced Saudi cleric Saleh al-Maghamsi, an Islamic supremacist who declared in 2012 that Osama bin Laden had more “sanctity and honor in the eyes of Allah,” simply for being a Muslim, than “Jews, Christians, Zoroastrians, apostates, and atheists,” whom he described by nature as “infidels.” That didn’t put an end to Salman’s ties to Maghamsi, however. The new Saudi king recently served as head of the supervisory board for a Medina research center directed by Maghamsi. A year after Maghamsi’s offensive comments, Salman sponsored and attended a large cultural festival organized by the preacher. Maghamsi also advises two of Salman’s sons …. 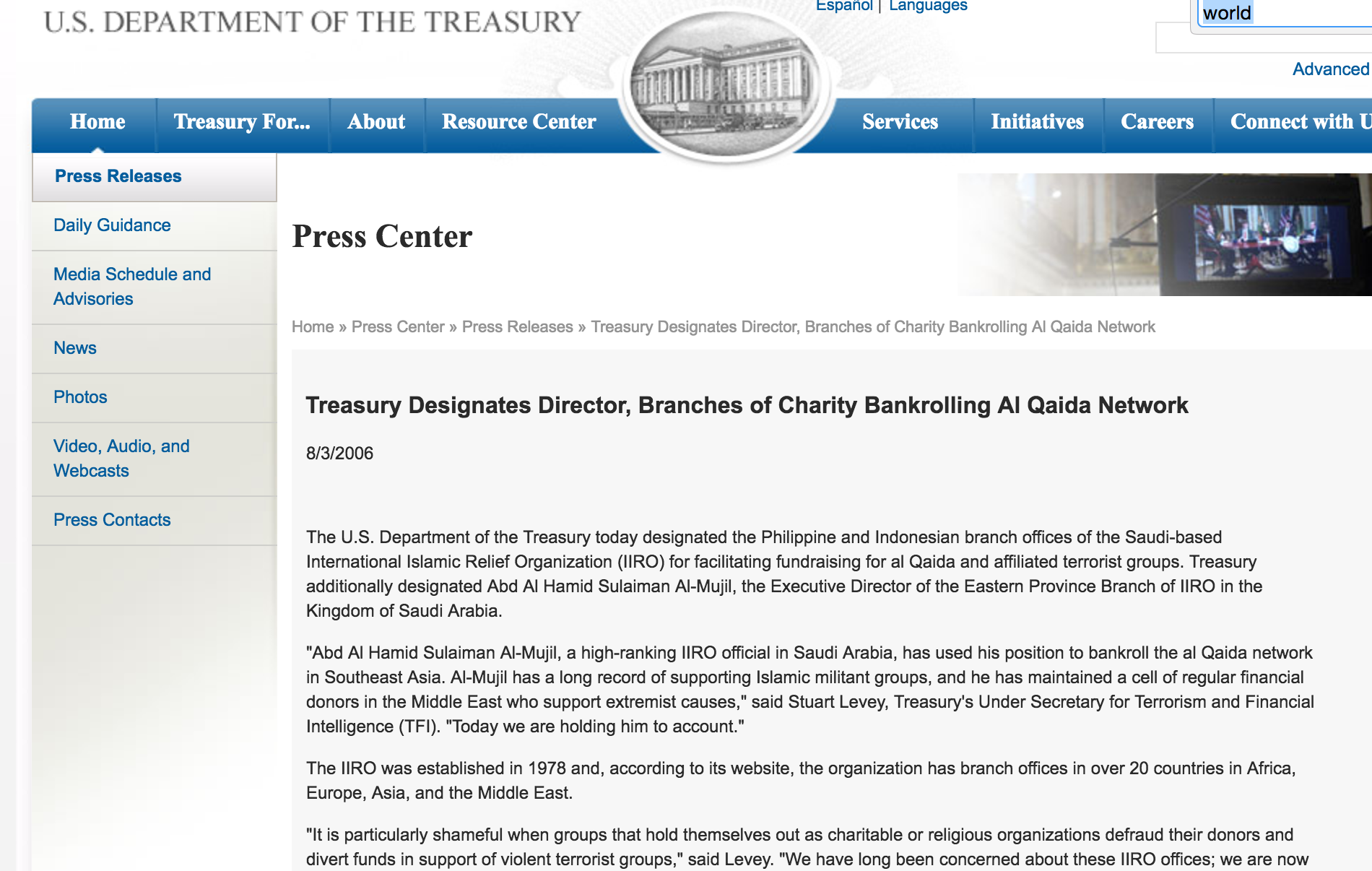 By 1994, if not earlier, the NSA is collecting electronic intercepts of conversations between Saudi Arabian royal family members. Journalist Seymour Hersh will later write, “according to an official with knowledge of their contents, the intercepts show that the Saudi government, working through Prince Salman [bin Abdul Aziz], contributed millions to charities that, in turn, relayed the money to fundamentalists. ‘We knew that Salman was supporting all of the causes,’ the official told me.” By July 1996 or soon after, US intelligence “had more than enough raw intelligence to conclude… bin Laden [was] receiving money from prominent Saudis.” [HERSH, 2004, PP. 324, 329-330]

One such alleged charity front linked to Salman is the Saudi High Commission in Bosnia (see 1996 and After). Prince Salman has long been the governor of Riyadh province. At the time, he is considered to be about fourth in line to be king of Saudi Arabia. His son Prince Ahmed bin Salman will later be accused of having connections with al-Qaeda leader Abu Zubaida (see Early April 2002). [PBS, 10/4/2004] It appears this surveillance of Saudi royals will come to an end in early 2001 (see (February-March 2001)).

Author Roland Jacquard will later claim that in 1996, al-Qaeda revives its militant network in Bosnia in the wake of the Bosnian war and uses the Saudi High Commission (SHC) as its main charity front to do so. [JACQUARD, 2002, PP. 69] This charity was founded in 1993 by Saudi Prince Salman bin Abdul-Aziz and is so closely linked to and funded by the Saudi government that a US judge will later render it immune to a 9/11-related lawsuit after concluding that it is an organ of the Saudi government. [NEW YORK LAW JOURNAL, 9/28/2005]

In 1994, British aid worker Paul Goodall is killed in Bosnia execution-style by multiple shots to the back of the head. A SHC employee, Abdul Hadi al-Gahtani, is arrested for the murder and admits the gun used was his, but the Bosnian government lets him go without a trial. Al-Gahtani will later be killed fighting with al-Qaeda and the Taliban in Afghanistan. [SCHINDLER, 2007, PP. 143-144; SCHINDLER IS A PROFESSOR AT THE U.S. ARMY WAR COLLEGE]

In 1995, the Bosnian Ministry of Finance raids SHC’s offices and discovers documents that show SHC is “clearly a front for radical and terrorism-related activities.”[BURR AND COLLINS, 2006, PP. 145]

In 1995, US aid worker William Jefferson is killed in Bosnia. One of the likely suspects, Ahmed Zuhair Handala, is linked to the SHC. He also is let go, despite evidence linking him to massacres of civilians in Bosnia. [SCHINDLER, 2007, PP. 263-264]

In 1997, a Croatian apartment building is bombed, and Handala and two other SHC employees are suspected of the bombing. They escape, but Handala will be captured after 9/11 and sent to Guantanamo prison. [SCHINDLER, 2007, PP. 266]

In 1997, SHC employee Saber Lahmar is arrested for plotting to blow up the US embassy in Saravejo. He is convicted, but pardoned and released by the Bosnian government two years later. He will be arrested again in 2002 for involvement in an al-Qaeda plot in Bosnia and sent to Guantanamo prison (see January 18, 2002).

A 1996 CIA report mentions, “We continue to have evidence that even high ranking members of the collecting or monitoring agencies in Saudi Arabia, Kuwait, and Pakistan – such as the Saudi High Commission – are involved in illicit activities, including support for terrorists” (see January 1996).

Jacquard claims that most of the leadership of the SHC supports bin Laden. The SHC, while participating in some legitimate charitable functions, uses its cover to ship illicit goods, drugs, and weapons in and out of Bosnia. In May 1997, a French military report concludes: ”(T)he Saudi High Commission, under cover of humanitarian aid, is helping to foster the lasting Islamization of Bosnia by acting on the youth of the country. The successful conclusion of this plan would provide Islamic fundamentalism with a perfectly positioned platform in Europe and would provide cover for members of the bin Laden organization.” [JACQUARD, 2002, PP. 69-71]

However, the US will take no action until shortly after 9/11, when it will lead a raid on the SHC’s Bosnia offices. Incriminating documents will be found, including information on how to counterfeit US State Department ID badges, and handwritten notes about meetings with bin Laden. Evidence of a planned attack using crop duster planes is found as well. [SCHINDLER, 2007, PP. 129, 284]

The original source of this article is Washington’s Blog