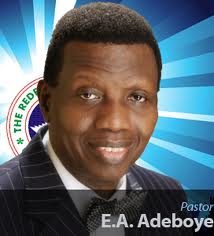 The All Progressives Congress (APC) in Ekiti State has described the
General Overseer of the Redeemed Christian Church of God (RCCG) Pastor
Enoch Adeboye as a fake, fortune seeking and an inconsistent political
pastor who always pray for politicians for cash.

The party described Pastor Adeboye as a fortune seeking and fake
pastor, asking; “Why are these fortune seeking pastors pretending to
be winning souls for Christ when they are selfish traders who are busy
exploiting the ignorance of worshippers? Instead of visiting the poor
in prisons, our fake pastors visit corrupt politicians who have stolen
billions.”

Pastor Adeboye had during his tour of the country to the state as part
of the church’s annual ‘Let’s Go A Fishing” programme, said to Mr.
Fayose: “We thank God for your courage, for your boldness, we thank
God for your being willing to take risks so that your people can be
protected. You have been a governor who knows when to say enough is
enough in defence of his people. And I’m sure you know what I’m
talking about and I am sure the world knows. I don’t want to say more
than that but be assured that we are praying for you and you will
succeed in Jesus name.”

The APC had through a statement issued on Sunday, by its State
Chairman; Mr Jide Awe accused Pastor Adeboye of collecting millions of
naira as bribe to commend Governor, Ayodele Fayose of Ekiti Sate, for
his courage and willingness to defend his people and the cause of the
common man in the country.

Yesterday, the party used a pseudonym, Pastor Julius Oluwafemi to
write an article titled; “Pastor Adeboye’s Endorsement Of Gov. Ayo
Fayose And Its Contradictions” published on Sahara Reporters to
further launch attack on Pastor Adeboye and the RCCG.

The article was written by Mr Hakeem Jamiu, who was Senior Special
Assistant on Research when Dr Kayode Fayemi was governor of Ekiti
State.

The Sahara Reporters article read: “Instead of paying millions of
naira to purchase political endorsement of religious leaders, Governor
Fayose should realize that Pastor Adeboye is an inconsistent
politician. Even though he supported and prayed in vain for the
re-election of President Goodluck Jonathan he has since switched his
alliance and loyalty to President Buhari.

“After all, he prays for the success of the Buhari regime on the
ground that Professor Yemi Osinbajo, the Vice-President is a pastor
within the RCCG fold. These days, he goes in and out of the
presidential villa at Abuja to pray for President Buhari.”

The APC also went further to say that Pastor Adeboye, in asking other
governors to emulate Governor Fayose was asking the governors to loot
the treasury of their states.

They faulted Pastor Adeboye, asking whether he was asking other
governors to hire and fund thugs?

“Is Pastor Adeboye asking other governors to travel to China to
execute fake projects like the poultry scam?”