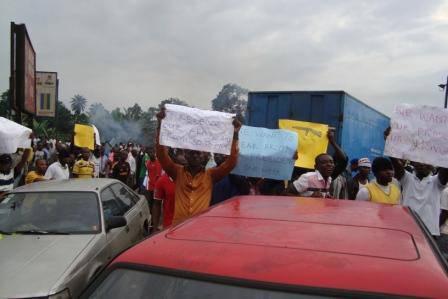 Scores of angry ex-militants from Bayelsa and Delta States disrupted traffic for hours along the Mbiama-Yenagoa section of the East-West Road on Monday in protest against the delayed payment of five months’ stipends owed to them by the federal government.

The protest left travelers, commercial drivers, and commuters stuck in the gridlock for several hours.

The ex-agitators arrived at the Mbiama-Yenagoa junction of the road as early as 6 AM with placards displaying “Buhari, Pay Us Our Stipends,” “Don’t Politicize Niger Delta Amnesty,” and “Boroh Pay Us Our Money” and chanting solidarity songs.

Heavily armed soldiers and other security personnel were at the scene of the protest to forestall any breakdown of law and order.

It took the intervention of the commander of the special joint security outfit in the Niger Delta, codenamed ‘Operation Delta Safe,’ Rear Admiral Joseph Okojie, for the former agitators to back track and open the road to traffic.

Mr. Okojie urged the ex-militants to be patient with the authorities, assuring that their stipends would be paid to them.

It would be recalled that Bayelsa State Governor Seriake Dickson had appealed to ex-militants to be calm and exercise patience with the federal government over the delay in the payment of their stipends during the weekend.

He also called on the Presidential Amnesty Office to urgently pay whatever was due to the ex-agitators.