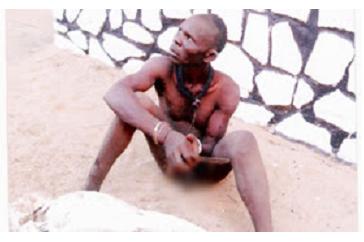 DailyPost– Joshua Akindele, a 56-year-old man was caught by a vigilante group along Badagry-Seme border where he allegedly eats and sells human parts for ritual purposes.

Before his arrest, the man who hails from Etokia Local Government in Ogun State was spotted by one Anthony Amos as he crawled into a hole under the Gbaji bridge.

Joshua who had once served a 5-year jail term for raping a minor, confessed that he had been into cannibalism and ritual killing for the past 15years, after being introduced to the business by a friend.

Speaking to Newsman, the already battered Akindele confessed to having a hand in the incessant killing within the village.

He claimed that his tactics was to attack his victims by hitting them on the head with a plank, and drag them forcefully into a hole that doubles as his hideout. The body of his prey would be cut in pieces; some parts for food, while others for sale to ritualists.

According to him, “I have been in this business for the past 15 years after my friend advised me to stop riding okada and to join him in ritual killing and cannibalism. Whenever I see somebody walking alone without being conscious of who is watching, I walk slowly up to them and use a big ply wood to hit them on their heads after which they fall unconscious, I then drag them into the hole and use a knife to cut them into parts which I sell to some churches and some ready buyers who indulge in ritual killing for easy money, and some times when I feel hungry late in the night, I eat some parts for food.”

Narrating how he nabbed the human eater, Amos, member of a vigilante group said he was doing his normal security job on that fateful day; 21st of November, at about 1 AM when he noticed a human figure crawling into a hole with a big bag saddled to his back.

He quickly alerted other members and they besieged him with a gun and ordered him to drop and open what he was carrying.
To their utmost dismay, when Joshua opened the bag,it was full of rotten human parts; skulls, legs, hands, breasts e.t.c.

Confirming the ugly incident, the Baale of Ajara Topa community, Chief Samuel Amosu Owolabi told Newsman that when he got the information of the arrest, he quickly called Chief Patifo , Baale of Iyafin whom his community shared the bridge with to accompany him to the scene.

His early arrival saved the life of Joshua as the angry mob was at the verge of torturing him to death.

The culprit was later handed over to the police in Badagry division for further investigation.

Clifford Orji was another infamous Cannibal who terrorized Oshodi area of Lagos State, but has since been killed.