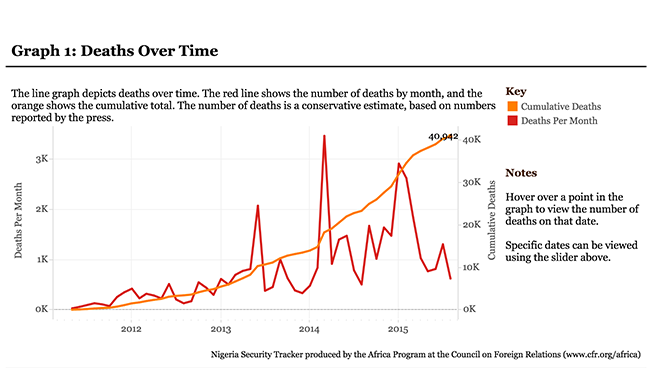 Boko Haram related terror deaths are on a downward plunge. The United States coordinated terror-death tracker, the Nigeria Security Tracker (NST) has been recording terror-related deaths since the inception of the Goodluck Jonathan administration.

Goodluck Ebele Jonathan of the PDP party in Nigeria came into office as president in May of 2010. His reign which lasted till May of 2015 was marked with 40,000 terror related newspaper reported deaths, mostly from Boko Haram terror and military counter terror actions and also from increased sectarian terror events.

Nigeria Security Tracker (NST), a project of the Council on Foreign Relations’ Africa program is the only public viewable project that monitors deaths reported in Nigerian dailies.

It is important to note that the deaths are grossly under reported even in the NST, this is because the NST only counts deaths reported in Nigerian dailies which are very incomplete and through the reign of Boko Haram terror were unable to penetrate thousands of acres of Nigerian territory under command of Boko Haram. Estimates put the true figure of Boko Haram terror deaths at hundreds of thousands to over a million. Several mass graves have been discovered in recaptured territories. Boko Haram was on a well financed mission to claim the resource-rich land of the northeast without its people.

The Jonathan government was largely accused of shielding Boko Haram sponsors who he said he knew but refused to publicize. He is also recognized of supervising the plundering of over 20 billion dollars budgeted to equip the Nigerian army to secure Nigeria. The former administration also came under angry condemnation for wrecking the Nigerian army and supervising the systematic transfer of Nigerian military weapons, vehicles, armored carriers and funds to Boko Haram. Several failed and sham cease-fire deals saw the deliberate payment of millions of dollars directly to Boko Haram terrorists; military gear and state funds that were used to build rag-tag terrorists into the most deadly terrorist group in the world today according to global records.

Boko Haram has in addition to the over 40,000 deaths, in its pogrom targeting farmers in the nation’s resource-rich northeast, managed the displacement of over 3 million Nigerians, the second highest displacement in the world today with 1.4 million children reported displaced according to latest records.

New strategies including first and most importantly coordinating with Nigeria’s oft suspected neighbors and addressing their grievances to force them to stop allowing their States to be safe havens and retreat cum maneuver escape zones for terrorists under pressure, as well as the seeking of global cooperation and properly repositioning the army by the new Buhari/Osinbajo government has brought radical change to the fate of the Nigerian war against terror. With the relocation of the military headquarters to the affected northeast and new morale build up in the army with an army chief who actively participates in military actions, Nigeria has decidedly blocked Boko Haram supply routes, captured major terror suppliers and facilitators and forced the terrorists into a position of disorganization, hunger, immobility via lack of fuel supplies and lack of weaponry, leading to massive surrender and foreseeable defeat of the seemingly intractable terror agency.

Trade routes are being re-established, schools are reopening and life is slowly returning to the years-ravaged northeast.

What is largely left in the successful war, that Nigerians ask for, is for the Buhari government to unveil the sponsors of Boko Haram and bring them to book. Nigerians are confident that as fast as democratic systems permit, the new energized Department of State Security, DSS and larger National security department will soon finally let the world know who has been behind Boko Haram and why.

After six hopeless years, there seems to finally be hope for a nation desperate for peace, security and the semblance of order.