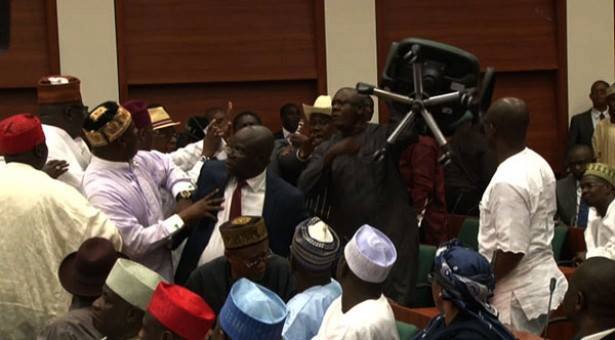 LAWMAKERS had a violent return to work yesterday, after a long break.

The crises rocking the Peoples Democratic Party (PDP) spilled over to the House of Representatives, with Abubakar Baraje and Bamanga Tukur factions of the party clashing.

Room 0.28 where a delegation of the Baraje faction was slated to meet with the leadership of the green chamber and brief its loyalists in the new PDP soon became a churning mass of struggling bodies and ripping fabric.

The G-7 governors watched in awe as blows flew and clothes were torn. Members climbed on chairs and jumped on tables. Tempers ran riot as the hall erupted in violence. Lawmakers from the two factions launched at one another’s throats in an attempt to establish dominance in the hall.

The white flowing robe (Agbada) of Hon. Afees Adelowo (PDP Oyo) was torn into shreds by a former member of the House, Binta Masi Garba and now Women Leader for the Baraje faction, as she sought to stop him from his anti- Baraje chants.

On the right side of the packed hall, a group of pro-Baraje lawmakers exchanged blows with Hon. Henry Ofongo ( PDP Bayelsa).

Soon, there were pockets of fights in various parts of the hall.

Baraje’s speech was subsequently made inaudible by the incessant chants of the members of the PDP .

But the hall became silent when Speaker Aminu Tambuwal took the stand. Members honoured him, giving him an enabling atmosphere to deliver his speech.

Tambuwal said the situation in the PDP puts democracy at risk.

His words: “As politicians and leaders, we’re deeply concerned about developments in the country in recent weeks, especially the face-off within our Party.

“This development, once again, exposed our vulnerability and the status of the culture of inter-party democracy and tolerance. Political parties and the political infrastructure mean that democracy can only flourish when there are strong political parties and well developed institutions and firmly entrenched democratic culture.

“It is important, as politicians, to constantly remind ourselves that the democracy we have belong to entire Nigerians and not politicians alone.

“Indeed, all Nigerians fought to install this democracy and many paid the supreme price in the process. Therefore, we must not by our actions thwart the supreme sacrifices by our heroes past with levity.

“While acknowledging that political parties are vehicles through which we pursue our ambitions and aspirations, we must all conduct ourselves strictly within the confines of our Constitution.

“I wish to caution that Nigerians need peaceful atmosphere to conduct their lives and business endeavours, I make bold to say that we, card-carrying members of political parties, contribute not more than 25 per cent of the population of this country.

“Let us, therefore, take conscious effort to allow national interest take the driving seat and not our personal ambitions.

The new PDP members, at a briefing led by Hon. Andrew Uchendu (PDP Rivers), said the action of the PDP members in the House shows the level of lawlessness, impunity and intolerance in the party.

“They formed the New PDP so that Nigerians can heave a sigh of relief,” he said. On the need for the meeting with the Baraje-led executive, Uchendu said it was for a fuller briefing since most of the drama occurred when the House was on recess.

“What happened today at this meeting was what our leaders have been complaining about – reign of impunity, lawlessness, intolerance and lack of courage to agree and disagree.

“Since all of us can’t sit to arrive at the same conclusion, it will make greater sense to have allowed the Baraje-led executive to brief those who are loyal to them.

“But, in their character and in condemnation of all of us, they came in to disrupt the meeting, unfortunately for them, Baraje still went ahead and briefed us,” Uchendu said.

He went on: “This just showed the reign of impunity that has pervaded the entire fabric of our polity and this can’t be allowed to continue. This country belongs to all of us and there must be a new direction, which is what the Baraje-led National Working Committee is out to achieve.”

Asked why he was raising a Point of Order that started the fracas, Henry Daniel-Ofongo said he explained that he only wanted to tell the gathering that the meeting was supposed to be with the Caucus of the House and not for everybody.

“There is freedom of speech; why would they not allow me to air my my opinion. This meeting is supposed to be with the Caucus of the House and for everybody; so why come with a crowd?

A member who pleaded not to be named said the reason for the open forum was to allow for everyone to air their view. “The Speaker was not ready to gag anybody or bar anyone from attending the meeting, which is what democracy is all about,” Daniel-Ofongo said. –source

A meeting between the seven governors of the new Peoples Democratic Party faction, and members of the House of Representatives has ended after fighting broke out.

The governors, alongside the chairman of the faction, Abubakar Baraje, met first with senate president, David Mark.

A follow up meeting at the House of Representatives with Speaker Aminu Tambuwal, and members of the House, degenerated into chaos with supporters of the Bamanga Tukur-led PDP jeering at remarks made by Mr Baraje.

The chaos soon escalated after two members, Dagogo Peterside and Henry Ofongo, from Rivers and Bayelsa states respectively, went up against each other.

Mr. Baraje told Mr. Mark that President Goodluck Jonathan must give up his ambition for a new term –source