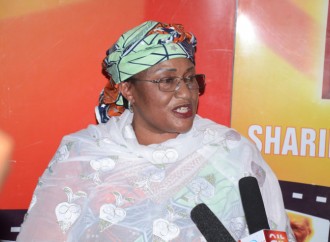 Following reports that the 21 Chibok girls released in unspecified terrorists and cash exchange negotiations with Boko Haram last October are infrequently seeing their parents and only singing and dancing and learning to bake, the Nigerian minister of women’s affairs has released a Press statement confirming the allegations by a community leader.

In the report the minister, Jummai Alhassan said, “The girls speak to their parents/families every weekend and the parents visit from time to time.”

The minister did not specify how frequent or infrequently the parents were transported all the way from Borno to Abuja to be with their children.  The earlier report had indicated that it was so infrequent, many parents were even unable to see their daughters for Easter.

The full report is below:

Highlights of the Press Conference by Minister of Women Affairs and Social Development, Jummai Alhassan, on the Chibok Girls (11th May, 2017)
1.Before the arrival of the 82 Chibok girls, we had been taking care of 24 previously-released girls, and four babies.
2. The girls are currently in 9-month Rehabilitation & Reintegration programmes under the Committee on the Rehabilitation and Reintegration of the Chibok Girls which is headed by Acting President, Professor Yemi Osinbajo and comprises of the Ministers of Health, Education ,Women Affaris & Social Development as well as a representative of the Office of the National Security Adviser, Representative of DSS and a representative of the Vice President.
3. The first 21 girls came back in bad shape, and spent almost 2 months in medical care. They were handed over to me on December 22nd, 2016.
4. The parents of the initially released set of 21 Chibok girls were reunited with the girls within one week of their return in October 2016.
5. Upon their return, all the 21 Chibok girls said they wanted to go back to school, but that they did not want to go to school in Chibok.
6. The 21 Chibok girls travelled to Chibok for Christmas in December 2016, as soon as they emerged from medical care. They spent two weeks with their families in Chibok.
7. The set of 21 Chibok girls and the three girls who escaped are currently in Abuja undergoing 9-month Rehabilitation & Reintegration programmes, including Refresher Classes in five subjects — Biology, English, Mathematics, Civic Education and Geography — and Sports & Vocational Skills Training (which requires them to receive mandatory training in ICT and one other vocational skill of their choice).
8. The set of 21 Chibok girls and the three girls who escaped were scheduled to travel to Chibok for Easter, but the security situation was not conducive. So, their parents were invited to Abuja to see them instead.
9. The set of 82 Chibok girls are currently undergoing medical screening (some need surgeries) in Abuja after which they will join the other 24 girls in the Rehabilitation & Reintegration programmes although on a different level. The medical screening should be completed in 2–3 weeks.
10. Photos of the 82 Chibok girls have been sent to families in Chibok for identification. Families are currently meeting to identify their daughters.
11. The people complaining that they are not allowed to see the set of 21 Chibok girls are not their biological parents or guardians.
12. Reports that we are preventing parents from seeing their children who are among the set of 21 Chibok girls are absolutely not true. The girls speak to their parents/families every weekend and the parents visit from time to time.
13. We are very careful who we grant access to the Chibok girls. We will only grant access to their parents, not community members, as we do not want people to keep asking them questions that will make them relive the horrible experiences they had while in captivity.
14. It was the choice of the Chibok girls and their parents — when they returned — to stay under the care of the Federal Government in Abuja.
15. The parents of the Chibok girls are free to visit them at any time. We will never prevent them from seeing their daughters.
16. One of the Chibok girls from the set of 21 has asked for permission to visit her family. We have allowed her to go. She will be back in two weeks.
17. We ask the Chibok girls — ‘who do you want to visit you from home?’ We invite whoever they tell us they want to see from time to time.
18. Persons doubting that the recently released set of 82 Chibok girls are really Chibok Girls — we are happy to pay for you to travel to Chibok to confirm from families.
19. We are negotiating seriously to have the rest of the Chibok girls released. We will not relent until they are all back.
20. We have no apologies or regrets whatsoever for exchanging Boko Haram detainees for our daughters. We will do it again if needed.
21. When the parents of the recently released set of 82 Chibok girls arrive from Chibok in a matter of days, doubting Thomases will see that they are truly Chibok Girls.
22. When they returned, the Chibok girls said they were scared to return to Chibok. So, we designed 9-month Reintegration Programmes for them.
23. When the parents of the first set of 21 Chibok girls arrived Abuja in October 2016, the first thing we asked them and the girls was to tell us exactly what they wanted. Both the parents and the girls told us they wanted the girls to return to school and also to be cared for by Fed Government in Abuja. This is why we had to design programmes for them.