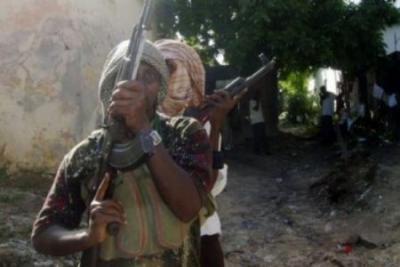 At least eight persons were killed on Sunday night in Kano by gunmen who opened fire on a mosque while worshipers were observing their Ramadan prayers.

A senior police officer, who spoke on condition of anonymity, said a gun battle ensued between the assailants and the police officers stationed in the area to protect worshipers.

“A gun battle near a mosque in the northern city of Kano and two other shootings left at least eight people dead on Sunday in the latest violence that hit the area,” he said.

One of the assailants was killed when his own explosive device went off during a shoot out with the police, while three others were shot dead by the officers. The other gang members fled, abandoning their car and the three motorcycles they came with.

The source said it was not clear who the actual target was — the police or the mosque.

The policemen reportedly survived the attack. The gunmen fled the scene after the attack.

Meanwhile, earlier in the day, gunmen on a motorcycle opened fire on a car conveying a Nigerian Air Force officer, killing the driver and the aide.

“A car of one of our officers came under attack this morning,” Air Commodore Sani Ahmed said.

“The officer’s driver and his orderly were travelling out of town, but as they reached an area called Yan-Lemo, two gunmen on a motorcycle opened fire on the car, killing the two personnel, although the officer was not in the car at the time.”

In another incident, two gunmen on a motorcycle shot two people dead outside their house in a nearby neighbourhood, said police spokesman, Rilwanu Dutse.

On Vanguard(Note, vanguard suspiciously will never refer to Mosque or Muslim in their title, apparently to obscure news): http://www.vanguardngr.com/2012/07/ramadan-eight-killed-as-gunmen-open-fire-on-worshippers/

SaharaReporters thus far refused to publish this story, it seems to go against their pro sectarian strife agenda.