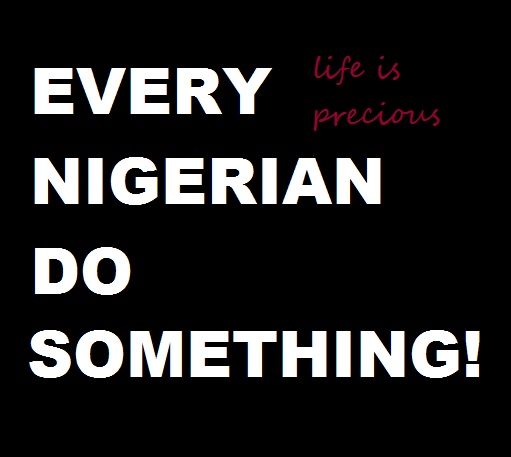 How many more must die for you to figure out that this is not working and rise up to replace the government, the elders and the formation of Nigeria if that be?

Another 60 of us were killed in Benue state yesterday. 60! People like you and me. I could be dead, you could be dead. Is it business as usual? Is a blood sacrifice going on? I feel like I die every time a single person dies stupidly in this country of ours. Don’t you feel that way too? How can you continue your daily business knowing that for some, business is no more? Life is gone. Brothers and sisters who were here yesterday, farming and singing are no more…killed due to the stupidity of our greedy government?

Hundreds in Borno, hundreds in Yobe, hundreds in Kaduna, hundreds in Katsina, hundreds in Adamawa. No less than 16,000 of us have been killed in this violence since 2011 according to US estimates; over a million families have lost a member. Billions worth have been burned of homes, shops, properties, even documents like birth certificates…passports, family pictures.

And the government does not care. Nothing is being done to stop this bloody mayhem. Those who rampage and kill and burn our villages are never apprehended. It is no crime to the evil vampires in power once you operate as a mob and kill and burn. How long shall we sit down and tolerate this…is it because we feel far away from the most affected towns and villages? We are not so far oh!

This madness will come our way, I promise you, even our wicked President has said he is now taking off his kid gloves a tad bit because people are worried that it will come to our parts.

Dear Nigerians, some of us are rising up to protest tomorrow, 27th March at the beckon of the JAF (Joint Action Front). Rise up! Protest with us, everybody, it is time for this murderous system and murderous government to go. This is not politics or tribalism, this is a war against evil and how long we will take it.

Do you see any cabal die from this madness? Do you see them being killed, their homes and businesses being burned? Is it not only us that are poor, that suffer and that die? Can you not see that the cabal have waged war against us and we are not even trying to fight back… some of us do not even know that they have waged war against us, our treasury, our economy, our security; everything, our now and our future… even our brain and conscience is under their attack. These workers of satan leave nothing behind.

Is this how those of us who were here and mature in the 60s, 70s, 80s, 90s watched as pogroms took place, as the peoples were exterminated openly and under government supervision and did not act? Pogroms are taking place right now, once again under our watch, will we just watch or shall we act?

The protests begin with you. You are the man to start and lead the protests. You are the soldier to seize the moment. You are the worker to fire your boss. Go out as one man today, tomorrow, you will be the one man that matters. Things must change in Nigeria. We must change things in Nigeria. These cabal have been engrossed so much in looting money that they have all lost their senses. Now they have crossed the line. It is time for us to replace all our leadership in this nation entirely, Emirs, Oba’s, Senators, Governors right up to the President. These are mostly wicked people; they watch people die in their communities in their states, in other states, in the nation and are not perturbed by it. They do not rush and set up meetings, committees, fund raisers and interventions to solve the crises. These are witches. They go now! It is time they go! Are these human beings? Are we human beings if we continue to do nothing?

Let me and you rise up and I promise you we will change this nation now. I have risen… From today, things will never be the same again.