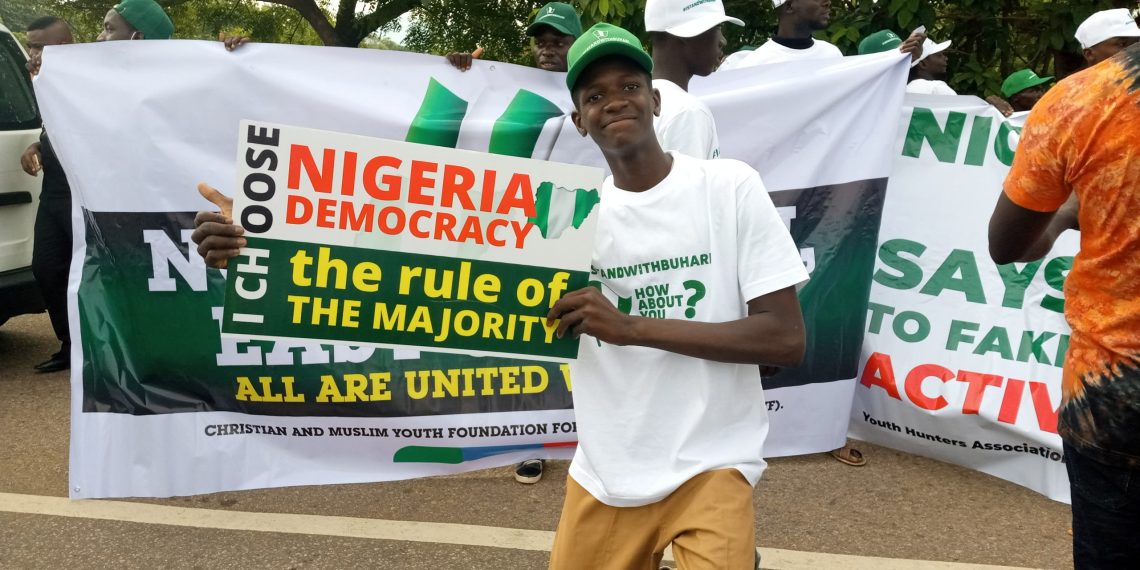 A brawl broke out on Saturday morning amongst members of the #IStandWithBuhari protest group at the Unity Fountain, Abuja.

The group leaders were seen in a heated exchange over the sharing of monetary resources meant for organising the counter protests.

Civil society organisations and human rights activists had called for a nationwide protest on June 12 against the Muhammadu Buhari-led administration.

According to various publicity posters, the protest will make 14 critical demands which are: Abolish 1999 constitution, End terrorism, End banditry, Isa Pantami must go (Minister of Communications and Digital Economy who expressed sympathy for terrorists), Free all detained activists, End insecurity, Justice for all EndSARS victims.

“We’re tired. Enough is enough. Is this a democracy or crazydemo?” – Small Doctor @iam_smalldoctor at #June12thProtest in Ojota, Lagos. pic.twitter.com/XSSmoi3tAC

Some pro-government protesters have revealed how they were recruited to join a rally aimed at countering the mainstream June 12 protests on Saturday.

Civic groups and activists had chosen the June 12 Democracy Day to express their grievances against the Muhammadu Buhari-led government, which they accused of poorly governing Nigeria and being lackadaisical in its handling of the country’s worsening security situation.

But in a move to overshadow the mainstream protests, hundreds of protesters sporting branded T-shirts with pro-Buhari inscriptions also trooped to the streets of Abuja on Saturday.

Some of them who randomly spoke to PREMIUM TIMES at Unity Fountain, Abuja, said they were promised to be paid between N1,500 and N2,500 to attend the counter-protest.

“I was in my area when they called me to come to do something. They promised to pay us. Some are promised N2,000 while some have been promised N1,500,” Abdul Yusuf told this newspaper on camera.

Mr Yusuf, in his branded T-shirt, physically exhausted from the rally, said they were mobilised by their leader, Muhammad Garba, from Area 1 District in Abuja.

EXCLUSIVE: We were promised N2,000 each to attend pro-Buhari rally – Protesters