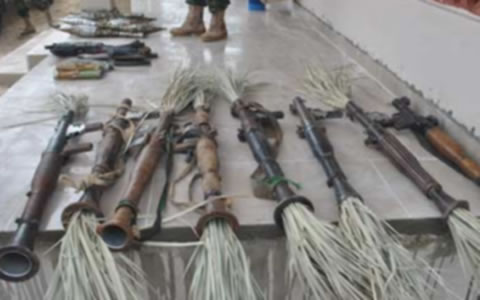 Terrorists behind the rash of bombings in the North have a game-changer, as they plan to replace the Improvised Explosive Devices with rocket launchers and rocket-propelled grenades, investigation revealed on Friday.

Consequently, massive importations of these high-calibre weapons are currently on.

RPGs are explosive projectile weapons used by insurgents to attack or destroy targets from long distances, while rocket launchers are devices that are used to propel missiles or explosives from long ranges.

It was gathered that their planned adoption of this new strategy would help them evade arrests by security agents.

A security operative said these weapons could be shot from long distances, thereby giving attackers sufficient time to escape, just as they could cause great havoc on their targets.

Many of the rocket launchers, our correspondent gathered, were smuggled into the country across the porous borders in the North.

Confirming that massive rocket launchers are in the country illegally, spokesman of the police, Frank Mba, in an exclusive interview, described it as a “worrisome development.”

He said, “We are aware of the presence of rocket launchers and I assure you that we are not sleeping.

“I cannot give you details of all we are doing, but I can authoritatively say we are doing all we can to cut off their supply chain.”

Mba further said the country was receiving immense international support from Economic Community of West African states and beyond.

“To tell you how far our international cooperation has reached, the Inspector-General of Niger Republic was in Nigeria a few days ago where he had fruitful meeting with our IG, Mohammed Abubakar.

“Also, the hierarchy of the INTERPOL, the world’s largest police organisation, have been having meeting with us in the past few weeks.

“This shows that even though we are worried, the good news is that the support from home and abroad is helping us face these security challenges.”

The Nigerian Immigration Service had earlier told SUNDAY PUNCH that the number of unapproved routes into the country were not known, making it extremely difficult for security agencies to track illegal aliens moving in and out of the country.

The NIS Public Relations Officer, Mr. Joachim Olumba, had said, “One fact that is undeniable is that our borders are porous. And many people think it is because security agents collect money and allow people to enter the country without proper documentation.

“But the problem is basically the fact that the structure of our borders makes effective policing absolutely difficult.

“We are talking about over 4000km land borders and over 800km borders along the ocean. In some places, these border areas are mountainous; in some places, they are in the jungle. There are countless illegal routes into the country,” he said.

An anti-terrorism official with the Nigeria Police Force told our correspondent that the attempt to use rocket weapons by terrorists was the latest challenge security operatives were battling with.

He said, “We are not in war. Why are these people bringing rocket launchers into this country? Rocket launchers are used in only wars! What do they want to turn Nigeria into? We are still contending with Improvised Explosive Devices and now this.

“Unfortunately, there are too many porous and illegal borders in this country. In Adamawa alone, there are about 25 illegal routes into Nigeria from neighbouring countries.

“The use of rocket grenades and launchers allows them run away before we get there. Some of the launchers can go as far as 900m.”

Speaking on the source of the military weapons, the highly-placed source said “extremist Arab countries” were supplying the weapons to terrorists in Nigeria.

“It is no longer news that the Al-Qaeda in the Islamic Maghreb have penetrated this country and we can easily tell where these rockets are coming from.

“We don’t have the sophistication to manufacture these war weapons. Iran, Yemen, Syria, Libya and others are suppliers.”

Just last Monday, 10 RPGs and other sophisticated weapons were recovered at the Nigeria-Chad boundary in Borno State by the Joint-Task Force.

Two suspected terrorists who accompanied the arms were killed in the Monguno Local Government Area of the state.

Musa said the arms were concealed in a blue Toyota Hilux vehicle going towards Maiduguri.

Director of SSS in Gombe State, Mr. Bitrus Asha, who conducted journalists round the ‘factory’ said, “Apart from the rocket launchers, 48 bags of fertiliser, sulphuric acid and cortex items were recovered. Other items recovered were detonators, remote control devices, different types of chemicals, six containers for preparation of IEDs and other items.”

The weapons have also found their way to the South-West as rocket launchers were recovered from a robbery gang in April.

Operatives of the Federal Special Anti-Robbery Squad, Lagos, said two rocket launchers; a grenade and a General Multipurpose Machine Gun were among the arms recovered from the gang that specialised in bank raids.

A combined team of security operatives had in October 2010, intercepted 13 containers laden with arms and ammunition including rocket launchers, cartridges and hand grenades at the A P Moller Terminals in Apapa.

The Apapa Area Customs Controller then, Abdulkadir Azerema, had said the contents of the containers were not declared before they were intercepted.

The first container that was opened by the various security agencies that carried out examinations discovered 24 crates of rocket launchers and other weapon of mass destruction.

The Federal Government later arrested and arraigned an Iranian, Azim Aghajani, and three Nigerians, for arms trafficking before an Abuja Chief Magistrate Court in November, 2010.

Nigeria reported the seizure of the shipment to the UN Security Council for possible sanctions against Iran.

At a briefing last Tuesday, Coordinator, Office of the Coordinator for Counterterrorism, Daniel Benjamin, said Africa experienced 978 terrorist attacks, with Nigeria alone accounting for about 20 per cent.