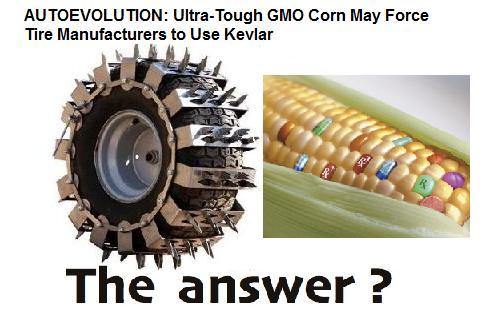 The news surrounding GMO crops continues to get further and further outlandish as the crops are increasingly mutated and sprayed with a medley of harsh pesticides, herbicides, and insecticides. The latest news comes from an unlikely source — an automotive publication known as Autoblog. The website reports that farmers who have opted to plant Monsanto’s genetically modified seeds have run into one daunting problem (outside of decreased yields and an extremely higher risk of disease): little ‘spear-like’ stalks from the harvested GMOs are absolutely wreaking havoc on the heavy duty tractor tires.

Described by one farmer as a ‘field of little spears’, farmers are now turning to kevlar tires. In case you’re not aware, kevlar is the same material used in bulletproof vests to protect from gun bullets.

The stalks are so sharp and weapon-like that they can wreck an entire set of wheels, which is a daunting reality when considered that one tractor can have as many as eight heavy duty tires. Furthermore, a single tractor tire can easily cost thousands of dollars. Thanks to the GMO crops, the average lifespan of a tractor tire has dwindled from five or six years down to just one or two — if the farmer is lucky. Add that to the exponentially increased amount of pesticide use required to maintain modified crops thanks to heavily mutated ‘super’ rootworms and other insects, and it’s easy to see how GMO farming is nothing but a monetary pitfall for farmers.

Strange reports like these may ultimately be what it takes for the public to truly be concerned about genetically modified seeds and ingredients. Outside of the massive amount of research highlighting the damaging effects of GMOs on human biology, the environment, and nature as a whole, it oftentimes takes a bizarre incident such as this in order to fully gain the attention of the far-reaching press. The longer the use of GMOs is allowed nationwide, the more bizarre and outlandish stories will begin to emerge.