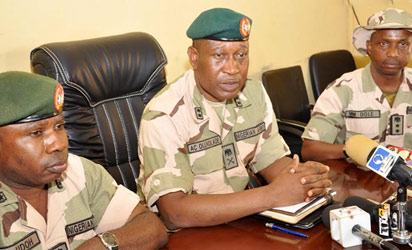 The Defence Headquarters has denied media report stating that 10 army Generals and several others have been indicted by a court-martial for aiding Boko Haram insurgents group.

In a statement signed by the Director of Defence Information, Major General Chris Olukolade, the Defence Headquarters said the report which it had earlier refuted when its first reared its head few weeks ago has o truth whatsoever.

The Defence Headquarters wishes to state once again categorically that there is no truth whatsoever in the report making rounds in a section of the media claiming that a Nigerian Army court martial has tried and found 15 senior officers including 10 Generals guilty for aiding terrorists.

The story as published in some dailies and zealously propagated by many online media is very unfortunate and meant to do maximum damage to the image of Nigerian Army and its personnel.   This falsehood had previously been refuted when it first reared its head but those concocting it appear hell bent on misleading Nigerians and the international community to give credence to the negative impression they are so keen to propagate about the Nigerian military.

It has become inevitable to reassure the general public that any ongoing disciplinary process or trial will be made public when necessary.  After all, Court Martial issues in the Nigerian Army are not known to be secret undertakings as it is on record that previous proceedings and outcome have been made public in the past.

Those who have decided to make a past time out of sensationalizing and fabricating sensitive security issues are again cautioned to desist from this practice especially in this period of the nation’s history. It is bad enough for any Army to try and convict a single General for such a grievous offence as alleged in the reports talk less of ten Generals. Nigerian Army remains a serious professional and responsible institution that cannot be associated with such incredulous report.

The general public is therefore implored to discountenance the report as the handiwork of those who do not mean well for the country and her Armed Forces.

Disciplinary processes being undertaken in any formation of the Nigerian Army are at best routine and definitely not at the level that has been so willfully exaggerated for clearly sinister motives.  For emphasis, there is NO General of the Nigerian Army under any form of trial.