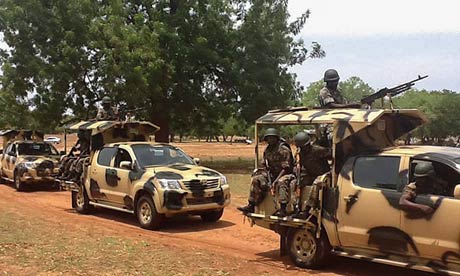 Advancing troops along Banki axis today afternoon cleared more terrorist camps and  captured weapons, flags and improvised explosives (IEDs) making devices at Jangolori and Bulaburma villages.
The recovered items have confirmed earlier intelligence that the terrorists often used corrugated metal roofing sheets and bathroom slippers in making improvised explosive devices which affects troops advance.
In addition, it is quite clear that the campaign against the terrorists is yielding the desired result because they are fast running out of arms, ammunitions and other logistics.
It is equally important to state and commend the synergy,  intelligence and information sharing  between our own forces and those of our neighbouring countries under the Multinational Joint Task Force . Consequently, the troops are quite optimistic that the Boko Haram terrorists would be defeated very soon.
The Nigerian Army wishes for the to call on patriotic citizens to please continue to avail troops with information. Our collective effort will continue to lead to more successes until the terrorists are completely defeated. We however wish to further state as the terrorists are on the run, there is need for more vigilance and security consciousness among all. Consequently, there is need for more alertness among all to pre-empt the terrorists and other criminal elements in the society.
Kindly disseminate this information to the public through your medium.
Thank you for your cooperation.
Colonel Sani Kukasheka Usman
Acting Director Army Public Relations
PRNigeria