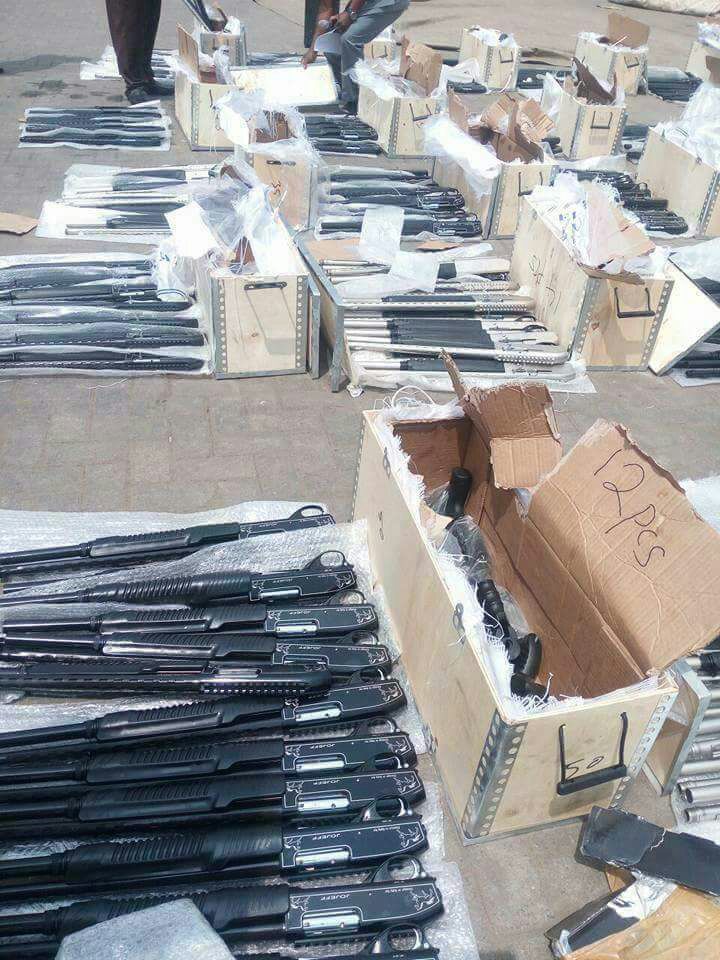 The Nigeria Customs Service intercepted 661 pieces of pump-action rifles from China, concealed with steel doors and other merchandise goods, which came in through Lagos port, an official said.

The Comptroller-General of Customs, Hameed Ali, made the disclosure while briefing journalists on Monday in Lagos.

The News Agency of Nigeria reports that the consignment was cleared from Lagos port.

The comptroller-general said the truck was immediately taken to F.O.U. premises for physical examination and 49 boxes containing 661 pieces of pump action rifles concealed with steel doors were revealed.

Mr. Ali said the rifles were under absolute prohibition, adding that its importation was illegal.

“Such deadly contravention of the law is even more unacceptable considering the fragile security situation in some parts of the country.

“Already three suspects have been arrested in connection with this illegal importation,” NAN quotes the comptroller-general as saying.

The suspects are: Oscan Okafor (an importer), Mahmud Haruna (a clearing agent), and Sadique Mustapha (accompanying the consignment to its destination).

“Investigation has already commenced and I have directed that the drag net should be wide enough to fish out all persons involved in the importation and clearing of the consignment, ‘’ NAN quotes Mr. Ali as saying.

Mr. Ali said that the seizure underscored the determination of the service to enforce all laws relating to importation and exportation of goods into and out the country thereby contributing to the economy, security and well-being of the country.

The comptroller-general said that the seizure was commendable and represented the new normal rule in the service “where most officers and men are on a daily basis ensuring that illegalities are not allowed unchecked’’.

He commended the Comptroller in charge of F.O.U. and officers and men who were involved in the seizure.

Mr. Ali, however, urged the media as well as meaningful Nigerians to help the service with information that would assist the service perform its statutory responsibilities in the interest of Nigeria.

He said the seizure would be handed over to the appropriate authority.