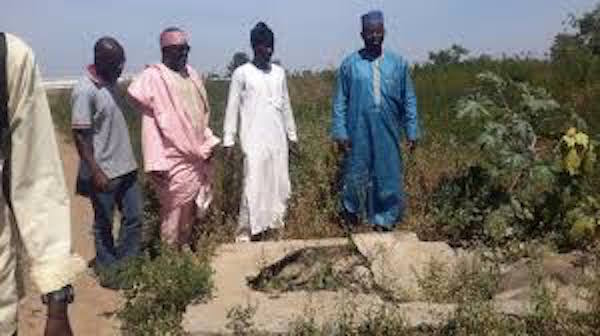 Worried over the unfortunate attitude of  dumping  refuse at the cemeteries  across the north, a Kaduna based cleric on Monday  has kicked against dumping of all kind of trashed ,and plastic pollution  on graveyards premises ,while calling on Citizens to be God fearing  and remember that, they are all going back to the cemeteries one day.

Addressing journalists shortly after a tour of some  of the graveyards within the metropolis, the cleric, who is the General Overseer of Christ Evangelical and life intervention  Ministry Church, sabon tasha kaduna state   Pastor Yohanna Buru, said a graveyard is supposed to be a clean and sacred environment and not a refuse dump site.

According to him , hundreds of cemeteries in Nigeria are in a very poor and bizarre condition as most of them have turn out to be latrines, refuse dumps, hideouts for criminals and Rituals, which has pose a threat and concern  to Nigerians.

The environment of most of the graved yard are not looking good due to the large number of plastic pollution surrounding the premises which need to be recycled.

Buru expressed worry over what he referred to as neglect of Nigerian graveyard sanitation by citizens . While stressing that  majority of cemeteries the Kaduna and other parts of Nigeria are in bad condition and full of dirt resulting from lack of sanitation exercise by some worshipers across religion faiths

He said, Cemeteries hold great significance to communities across the country, and it’s important to remember their value throughout our lives.

“A graveyard must be properly secured and fenced to avoid trespass or encroachment to the premises ,“it is not a grazing site for animal,neither a place of smoking herm ETC.”

“The surrounding of most of the cemeteries are not good looking due to lack of sanitation exercise by both worshippers.

“We must respect the dead- once, and  protect their environment against all forms of trashed and plastic pollution in their premises”

“There is the need for every state government to extend monthly sanitation to graved-yards in other to immensely save the poor state of Nigerian cemeteries from turning to a refuse ground instead of graved-yards,” Pastor Bury said.

Buru  urged the state governments across the north  to secure and start cleaning what he termed “final home”, adding: “When we grow old, God willing, we are going to be permanently laid in those grave yards so we must keep them clean”.

Pastor Buru advised the government, and religious leaders to educate and sensitize citizens as well as worshippers on the importance of cleaning graveyard.

Additionally, the cleric appealed to wealthy individual to always support in cleaning the premises of the graved yard.

Similarly, Mallam Gambo Abdullahi Barnawa kaduna  a Muslim scholar, and a member of a Non Governmental Organization on Peace building “peace Revival and recounciliation foundation of Nigeria”  expressed dissatisfaction over the condemnable attitude of some people that usually excrete at the cemeteries.

He emphasized on the need for Nigerians to use every last Saturday of the month for cleaning the cemeteries,so as to reduce all the dirt in the premises.