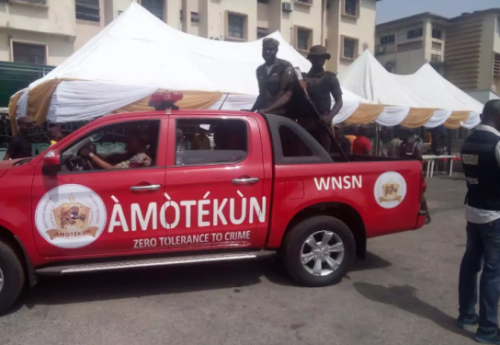 The Nigerian Government has opposed the establishment of ‘Operation Amotekun’ by South-West states, branding it as an illegal institution.

The government, through the Attorney-General of the Federation, Abubakar Malami, said that the group runs contrary to the provisions of the Nigerian laws.

Malami added that no state government haf the right to set up any form of organisation to protect its territory without approval from the federal government.

A statement by Malami reads, “The setting up of the paramilitary organisation called Amotekun is illegal and runs contrary to the provisions of the Nigerian law.

“The constitution of the Federal Republic of Nigeria 1999 (as amended) has established the army, navy and air force, including the police and other numerous paramilitary organisations for the purpose of the defence of Nigeria.

“As a consequence of this, no state government, whether singly or in a group has the legal right and competence to establish any form of organisation or agency for the defence of Nigeria or any of its constituent parts.

“This is sanctioned by the provision of Item 45 of the Second Schedule of the constitution of the Federal Republic of Nigeria (as amended) authorising the police and other Federal Government security services established by law to maintain law and order.”

Recall that Nobel laureate, Wole Soyinka, had commended the launch of regional security group by the six governors of the South-West region.

Governors of Lagos, Ogun, Ondo, Oyo, Ekiti and Osun states had united to launch ‘Operation Amotekun’ to combat insecurity and crime in the region.