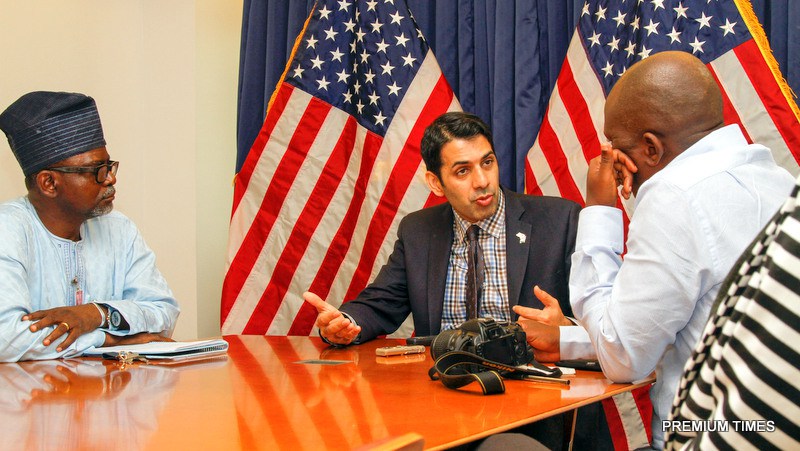 – He said everyone deserved religious freedom and tolerance

– He also urged the government to release the detained Zakzaky
Shaarik Zafar is US President Barack Obama’s special representative to Muslim communities. He was in Nigeria recently as part of his first visit to Africa to meet with government officials and civil society representatives.

The purpose of Zafar’s visit was to speak with them on issues of promoting educational and economic opportunities and accountable governance.

After the meeting, he spoke in an interview with Premium Times about his views on the persecution of Shiites in Nigeria and the importance of religious freedom.

Speaking on what his work involves, he said: “I report to President Obama and Secretary (John) Kerry. My job is to engage with Muslim communities around the world. A lot of the 1.6 billion Muslims around the world are here in Nigeria.”

He also said unity and tolerance among all religions was of vital importance, the representative appointed by Obama in 2014, said:

“For example, during the meeting, the religious leaders were not simply admiring the problem, or complaining about the problem of corruption. They rolled up their sleeves, men and women, most of them Christians, and decided to tackle the problem head on.”

Speaking on religious differences, he said: “America is deeply religious country, but under a secular government. Many of the founders of our country faced religious persecutions. We found that the best way to protect religion is not to leave it with government.

“So, in US, when you leave the house, your religion comes with you. So, you have the full right to practice your religion. I work in the seventh Floor of State Department where Secretary Kerry is. Every Friday, I and all those who want to pray can walk down four, five, six stairs to pray.”

Making reference to the ban on Shiites in Kaduna state, he continued: “So, religious freedom in many respects are first freedoms. So, if a state government or state institution is preventing the practice of religion, the job of the federal government is there to protect it.

“I am not asking because of the situation in the North. I don’t believe religious freedom in federalism are inconsistent. It’s possible to have a federal structure that fully appreciates a people who are given the freedom of choice to worship as they think.”

When asked to comment on the imprisonment of El-Zakzaky, the Shiite movement leader, he said: “Yes, we raised the issue. In U.S., we believe freedom of religion is paramount and the people should be able to fully practice and organise their religion as a matter of human rights. I made that very clear.

“When you have Shiites, Sunni, Sufi, and people like me from Pakistan, South Asia, Iranians and others, this is incredibly diverse community. Everybody is Muslim at the end of the day. That, to me, is something that is a strength.

“The same is true for Nigeria. Nigeria has an incredible amount of diversity. Over 370 something languages of different ethnic groups. The fact that Nigeria exists is a testimony to the strength of the Nigerian people. It’s not easy. But, people get along. That diversity is something that is great about Nigeria.

Meanwhile, the Shi’ites have claimed that they have uncovered a plan by security operatives to massacre southern Muslims and Christians.

The religious sect that has been outlawed in Kaduna and some other states said there was also plan to disrupt its religious trek.