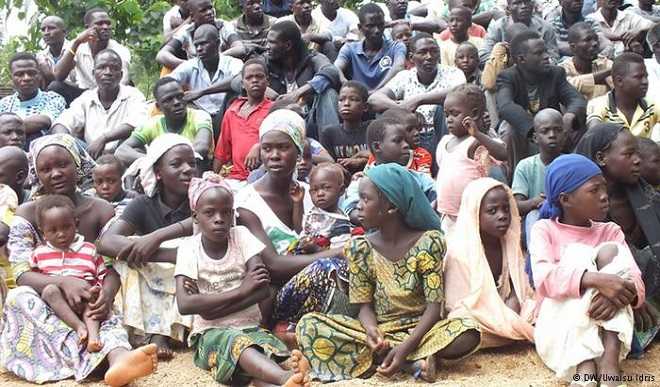 A suspected Boko Haram suicide bomber was shot dead by soldiers in Maiduguri after he was spotted trying to creep into the same IDP camp that nearly came under attack by a female suicide bomber who killed herself and five others on Saturday morning, officials said.

The suicide bomber was shot dead by vigilant soldiers who opened fire on him causing one of the two bombs around his body to go off.

Saturday and Sunday’s incidents appear to indicate that the insurgents have made internally displaced persons, IDP, camps a major point of target.

A top leader of the Civilian-JTF, Alhaji Dan-Batta, informed PREMIUM TIMES on phone that “the male suicide bomber was seen loitering around the back perimeter fence of Bakassi camp at about 9 a.m. He was shot down before he could advance closer to the camp. One of the bombs he was carrying exploded, but another is still strapped on his body did not explode. The anti-bomb squad operatives are trying to defuse that one”.

No other person was reported killed or injured from the explosion.

The incident did not cause any panic in the Borno capital as many residents were seen going about their daily businesses.

Sunday’s blast came as the fifth in the series of bomb attacks around Maiduguri by the Boko Haram in the last three weeks.

Since the release of 21 of the abducted Chibok schoolgirls three weeks ago, Boko Haram insurgents have scaled up their hostility mainly using improvised explosives.

The federal government had said it will be going into another round of negotiations with the insurgents with a view to securing the release of more of the girls. Despite that, the Boko Haram have continued with their terror attacks.

Neither the military nor the police have issued any statement on Sunday’s incident at the time of filing this report.