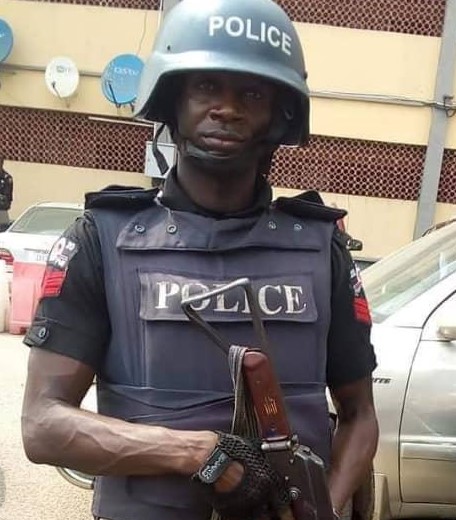 An army corporal has killed a policeman with an Anti-Aircraft Gun following an argument over a lady at Makara area of Gwoza Local Government in Borno State.

It was also learnt that Tafida, a father of two young girls, had already planned to depart Borno on Saturday before he was murdered by the unidentified soldier.

An eyewitness described the killing as “unfortunate and disheartening”, adding that the drama started with an altercation between the corporal and another police officer over a girlfriend.

“Some people intervened and settled the matter when the aggrieved army corporal asked a driver of an anti-aircraft gun truck belonging to his military base to turn and directly face the Limankara Police Training Camp.

“Immediately after turning the vehicle, they opened fire and shot at the camp. It was at that moment Tafida, the late police sergeant, was killed by a stray bullet despite not being involved in the earlier altercation.

“The blast of the anti-aircraft vehicle totally disfigured his left thigh as he was returning to the camp after he went to charge his phone somewhere. He eventually bled to death,” an eyewitness said.

It was gathered that some police officers in Borno protested the killing of Tafida but were pacified by an army major, who is the most senior officer in the location.

PRNigeria later gathered that both the military and police constituted a joint fact-finding committee to unravel the circumstances that gave rise to the ugly incident.

The committee had apprehended the culprit and took him to Maimalari Barrack in Maiduguri.

The military has also taken responsibility for the damaged facilities at the police camp.

The victim’s aunt, Mrs. Zwancit Dazang, lamented that nobody from either the police or army authorities have called to inform them of Tafida’s death.

“We only got to know about our son’s tragic death in the social media. He was dressed in combat boot, jeans and a MOPOL T-shirt, with his rifle strapped on his shoulder, when he was shot.

“The anti-aircraft truck, which is a lethal ammunition, has the ability to bring down a plane or helicopter from the sky.

“This is a dangerous firearm or ammunition that can even destroy an armoured tank. That a soldier will use it to eliminate an innocent, but a fellow security officer like him, is unimaginable,” she said.

Attempts by to get reactions from both the spokespersons of the Nigerian Army and the Police, Colonel Sagir Musa and DCP Frank Mba proved abortive as their mobile line could not be reached while text messages sent were not replied.