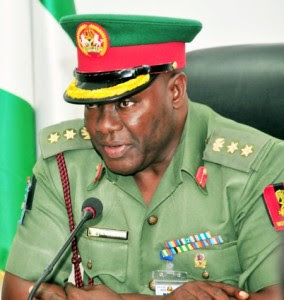 The heroic Nigerian troops have today captured the economic important and strategic town of Banki town in Borno State which is equally noted for fishing.

It is important to note that major economic and trading activities between Nigeria, Cameroon and Central African countries takes place in the town.

The gallant troops have completed exploiting through the town and terrorists’ famous Boko Haram Islamiyah (An Islamic School) building. In addition, the soldiers have destroyed  7 Boko Haram camps and  successfully detonated 7 Improvised Explosive Devices (IEDs). The troops have succeeded in discovering and detonating 13 IEDs between Darel Jamal and Banki.

During the encounter to recapture the town, several Boko Haram terrorists were killed and  several others were captured alive between Banki junction and Ngorosoye.

The recapture of the strategic town was facilitated by concerted efforts of the Nigerian Air Force and close liaison with the Cameroon’s Army.

The Chief of Army Staff’s  goodwill message delivered through Major General YM Abubakar, the Commander, OPERATION LAFIYA DOLE has gone a long way to boost troops’ morale and prod them into action.

The recapture of this town apart restoring Nigeria’s territory law, would improve the economic activities in that area.

In a related development, a renown terrorist trying to escape with his family, was intercepted by troops between Pulka and Gwoza and has surrendered himself to the troops.

Efforts to consolidate on the gains made by troops towards ridding all parts of Nigerian territory of Boko Haram terrorists are ongoing.