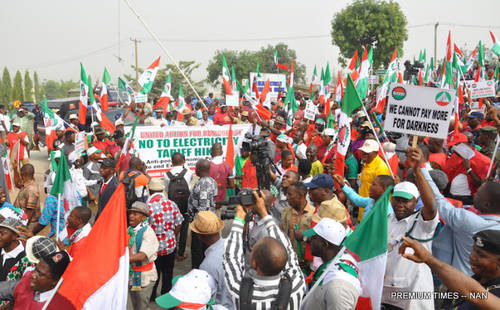 Some workers coordinated by the Nigeria Labour Congress (NLC) took to the streets on Thursday in Lagos and Abuja to protest what they described as the worsening human condition.

They called on the Federal Government to formulate policies that would reduce hardships and improve the lives of workers.

A News Agency of Nigeria (NAN) correspondent embedded with the protesters reports that the placard-carrying workers marched from Yaba, to Ikorodu Road, chanting solidarity songs.

The Trade Union Congress of Nigeria (TUC) also joined in the rally.

The Vice-President of the NLC, Mr Amaechi Asugwani, who addressed the protesters intermittently, appealed to government to bring change that would impact positively on the populace.

According to Asugwani, creating people-oriented policies will reduce the worsening poverty in the country.

He said that the rally was necessitated by the outcry of people, worried about the increasing cost of food, goods and services.

“The government should be sensitive to the plight of the people. It has not increased the salaries of workers and many companies have closed because of poor power supply,” the unionist said.

The protest attracted many activists, including maverick artist and former President of the Performing Musicians Association of Nigeria, Charles Oputa, known popularly as Charlie Boy.

Hundreds of policemen in combat gear were also on hand to monitor proceedings.

On Feb. 6, a similar protest was staged in Lagos and other cities in the country.

In Abuja, some workers gathered at the Unity Fountain in Abuja, the Federal Capital Territory, to commence the march against what they call the effect of poor governance.

A few days ago, #IstandforNigeria” group held a similar march through the streets of Abuja, but were stopped by armed policemen on their way to the Presidential Villa.

Leading the Abuja rally, Co-convener of the Bring Back Our Girls campaign (BBOG), Mrs Aisha Yusuf, said the protest is meant for Nigerians to express their anger over the hardship being faced by them.