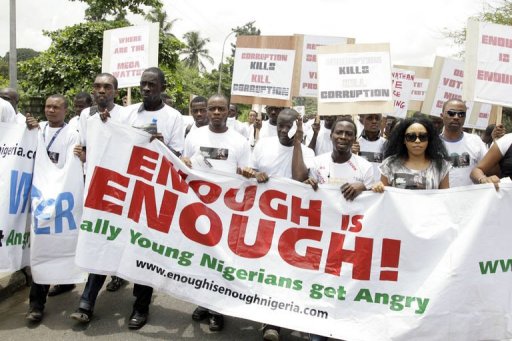 As a Nigerian youth, I particularly feel the burning desire to upturn if I can, the status quo forced on today’s generation by our leaders. No doubt, their actions have aborted brilliant dreams that could have impacted on our dear nation.

For decades, they have demonstrated incompetence and indifference towards the Nigerian youths, especially those at the lowest rung of the society. And to think that the same leaders who failed to serve as beacons of hope for the present generation, turn around to regard themselves as the messiah for a nation under the weight of their misrule, is simply disrespectful to the intelligence of the average Nigerian youth.

Believe it or not, there are courageous Nigerian youths out there in their numbers evolving under harsh conditions to right the very wrong decisions forced down their throats by the corrupt leaders whose sole life’s purpose has been the diversion of Nigeria’s commonwealth. Most of those parasites whom we look up to as leaders and mentors have over the years continued to build a very high wall between the youth and their collective opportunities, making it virtually impossible to realise the needed transformation which this generation deserves.

During the course of my life’s journey, I watched how many my childhood friends of mine- some classmates, and others neighbourhood friends- died and lost their sanity due to their inability to tough it out through the storm this nation foisted on them. Many of them had quality minds and tall ambitions. But they were never given a chance and they could not take one themselves.

The desperation of our leaders is now manifest in the war of shame between Nigeria’s opposition and ruling political parties. These squabbles have lowered the content of Nigerian politics from the intellectually-driven era of Nnamdi Azikiwe and Chief Obafemi Awolowo. Their approach to politicking engages all sorts of devious tactics ranging from calumny and defamation to blackmail and murder. These, unfortunately, make only the poor, targets of their conspiracies and vendetta not minding the number of lives wasted in the process.

A typical reference point is the Boko Haram scourge, which since its emergence, has affected mostly the less privileged. Rarely has it ever happened where the rich was caught in the crossfire of the sect’s bloodbath. Lately, the latest has been using poor young girls, to undertake suicide bombings.

The onslaught by our leaders has affected all sectors of our wellbeing, key amongst them is education. A survey of the opinions of 5,507 stakeholders carried out to determine the educational standards in Nigeria showed that standards have fallen at all levels of education, with the tertiary level being most hit, followed by secondary, and least, primary level.

Three major reasons found to be responsible for the failure of education in Nigeria were poor funding of education, poor implementation of educational policies and programmes and poor attitude to school-work on the path of frustrated students.

Despite recommendations made following the survey which included better funding of education, adopting UNESCO’s 26 percent minimum of annual budget, inculcation of the tenets of traditional education, and utilization of research findings in managing Nigeria’s education, same is yet to be implemented.

Looking closely at every aspect of our existence as a society, we find that the motto which defines excellence differs from what obtains in developed countries of the world. For Nigeria, what reigns supreme is the celebration of mediocrity. It is only in Nigeria that we find people aged 50 and above being youth leaders and so on. Now, if someone aged over 50 insists on being a youth leader, simply because he represents the interest of a bureaucratic system, can the interest of the youths be protected at any given time? Certainly, no!

For instance, a closer look at see the sort of music that rules the airwaves would leave any enlightened mind baffled, causing one to wonder what the future holds for this generation and that which is to come. For one, heavy emphasis now lies on the accumulation of wealth through any means necessary, thereby leading to the neglect of basic moral principles. The outcome of such moral decadence has made prostitution and human trafficking seem like legitimate businesses; and human ritual killings as just about any sane exercise for those termed “strong”.

Nigerian youths have long been forced to live in the dark by these slave masters disguised as leaders and mentors who have nothing to offer. It is time to break from the shackles of deprivation by giving up ourselves in firm pursuit of “Awakening.”

It is time for a new generation to take control of the wheels of affairs at all levels with a view to ensuring progress for all. It is time to redefine “Might is Right! We must put an end to corruption and the reign of impunity! We must open our minds to the rays of illumination around us, and tap into its wisdom, strength and courage to set ourselves free. Our time is now! We must rise! We must be free!