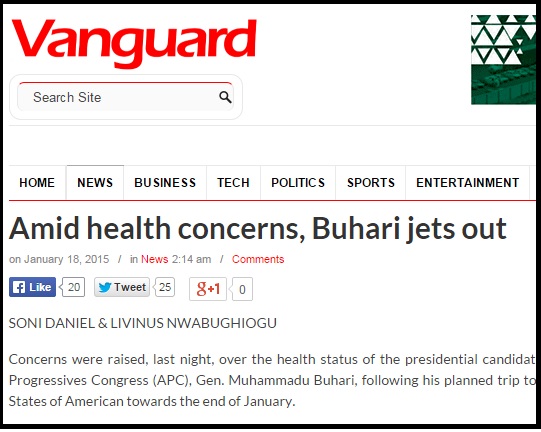 N21 billion raised in one night of a total of over N60 billion later donated for PDP campaigns is said to have gone to work with prominent Nigerian dailies being bribed stupid to spread rumors against chief opposition candidate Muhammadu Buhari, so Nigerians say.

As the Vanguard published a story on Buhari’s planned campaign journey to the US as being for ailing health, which read obviously like a rumor and slander, Nigerians were quick to comment.

The comments typically asked how much Vanguard was paid of the initial N21 billion raised for PDP promo.

Various Nigerian media have reported being offered humongous bribe to publish PDP propaganda and famous blogger Linda Ikeji recently asked her readers’ their opinion as she had been offered millions! Even individuals are being loaded with cash to help the ruling party tweet slanderous fabrications to their fans and followers, NewsRescue credibly confirms from numerous accounts.

Vanguard!!!! How much were you paid for this story? he jets out you say, not he will jet out oh! Seems it’s the 21 billion naira working. You have collected your share already, so you now write in future terms. Is it that you guys are so scared? You now wish for him to die, or you want to kill the man already? Thought you say he can be beaten in an election? So, the only way you can win the election is for the opposition candidate to die before the election? Hahahaha. Death has nothing to do with age. Umaru Yar’ Adua was even younger than Dumbo when he died, and Baba Shege is still alive and kicking. Baba Shege was President when Jonathan was still shoeless in Utuoke, and he is still alive, willing and ready for another term, if he is given. And you guys are here talking about death.
I think the death you ought to address is that that of 2000 innocent Nigerians killed in Bagga because of sheer incompetence of your Commander in Chief, a clown permanently in circus arena. You should read the wires and see what the international community think of Nigeria, of your journalists and the intelligentsia.
Pathetic people.