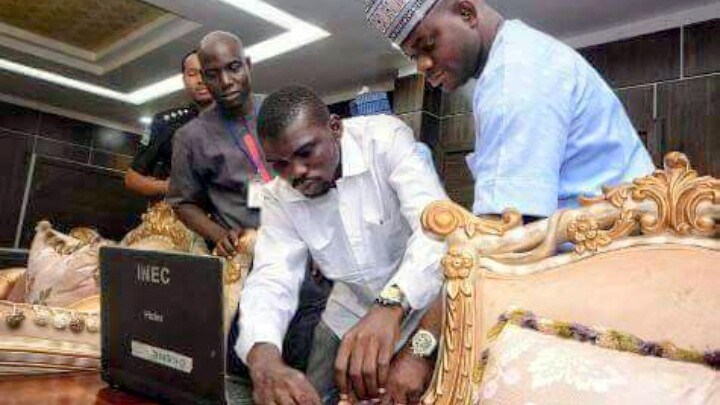 The governor of Kogi State, Yahaya Bello, is enmeshed in double voter’s registration scandal, after he was pictured in his office registering as a voter the second time, having already registered in Abuja.

Mr. Bello was shown being registered by officials of the Independent National Electoral Commission, INEC.

A group, Kogi For Change, in a statement signed by its chairman, Omeiza Yakubu, said it would take legal action in view of the illegality of Mr. Bello’s action.

At the Kogi governorship election tribunal, the governor’s Chief of Staff, David Onoja, standing as a witness, had said his principal never registered to vote in Kogi, but Abuja.

However, in the course of the ongoing Continuous Voters Registration, CVR, exercise, Mr. Bello registered again, this time in his office, in Lokoja, Kogi State capital.

“We got really concerned when we saw the picture of the Governor (Yahaya Bello) being registered by an INEC official inside his office,” said Kogi For Change. “Is the Government House a Registration Centre?”

It continued: “What happened to the INEC law that forbids double registration since the governor is already registered in Abuja? Then the question arises: Is the Government House the Ward or Unit of Alhaji Yahaya Bello? Was he not supposed to register in his Unit? Or is INEC going to create a special voting point for him inside his office during the next election?

“The impunity that unleashed the governor on the state is at work again and we are not going to take it lightly. As a matter of fact we have decided as a group to take the matter to talk. It is a criminal offence to engage in double registration,” the group said.

In a statement to PREMIUM TIMES Wednesday morning, Mr. Bello’s spokesperson, Kingsley Fanwo, did not deny his boss registered twice, but suggested it was not illegal.

He argued that the governor had to register again in Kogi, because nothing had come of efforts to get INEC to transfer his voter’s card from Abuja to Kogi.

He acknowledged the picture of his principal being registered in his Lokoja office, which he said had elicited “hysterical overplay”.

“From the first day, the Governor didn’t say he registered in Kogi State,” said Mr. Fanwo. “It even came to the fore at the tribunals. He registered in Abuja.”

“He never voted in Kogi State. Nothing in the law makes it mandatory for you to vote for yourself before you can win a political position. We have had people who won elections from detention in the past. They wouldn’t have voted for themselves from detention.

“The Governor’s efforts to transfer the card from Abuja to Kogi State has not been successful, hence the need to seize this golden opportunity to get registered in Kogi State,” he added.

Kogi For Change also criticised INEC for registering Mr. Bello in his office, a place not designated for that purpose.

But Mr. Bello, through his spokesperson, said he had to register in his office to encourage others to follow his example and take part in the electoral process.

“He needed to demonstrate that to the whole world to woo others to go and register,” Mr. Fanwo said. “There was nothing wrong with registering in the Governor’s Office because it belongs to all Kogites. Government House is People’s House.”

INEC could not be reached immediately for comment on this story.