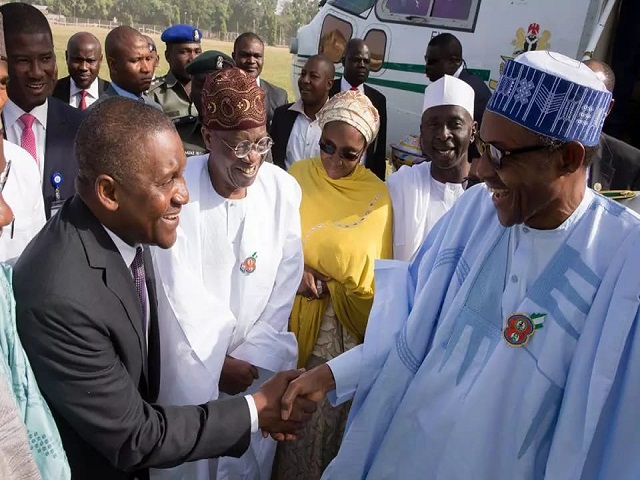 From the Americas, through Europe, the Mediterranean Basin, the Persian Gulf and Arabian Sea, East Africa to China and Japan the global price for the ordinary grey Portland cement averages out at $62/tonne by mid-December 2017 data.

At $1:N350, that is N21,000. This is the average global price for the everyday cement we buy, produced and bagged in Nigeria by just two players who have swallowed everybody else up with one of them as the local leader. Now a tonne of cement is 1000kg, i.e 20 x the 50kg bags we buy on retail in Nigeria.  This is to say that the fair price for the 50kg cement bag sold in Nigeria even in non-producing countries is N1,050. Nigerian cement at N2650 is THE COSTLIEST IN THE WORLD.

This has been the scenario since December 2015 when cement last sold in Nigeria for N1500 per 50kg bag, even then a high price. Since then the price has increased steadily to the current retail price.

But why do Nigerians, citizens of one of the world’s lowest income economies per capita with majority of the people living below the poverty line and facing shortages on every front, most especially housing where cement is most needed, have to bear the burden of the world’s costliest cement, made locally by fellow citizens while the government looks the other way? And if the price to pay for local production is more than 250% the global average, isn’t this an indication of depravity? What then is the benefit beyond misplaced bragging rights to local self-sufficiency in cement production at killer pricing? What then is suffering and smiling? If we can’t compel fair prices for commodities to lift the yoke on the citizenry, shouldn’t we open our borders to competitively-priced cement imports? What is the mandate of Consumer Protection Council with regards to extortionate pricing for essential commodities like cement, also called ‘essenco’ in the past? What agency in Nigeria is tasked with dealing with anti-trust, monopolistic and combine pricing practices against citizens by industry/market players, local and/or foreign? And what are they doing to reverse this anomalous trend of the costliest cement produced and sold locally and even exported, as we now hear (and luxuriate in) when citizens of countries that rely solely on imports pay less?

I support the Buy Nigeria Initiative and believe in supporting Nigerian businesses to grow the economy and develop the nation. But not at the expense of monopolistic economic exploitation that depletes the hard-earned poor incomes of the masses and puts same in the pockets of greedy Magi.

Please let nobody give this intervention a tribal slant like the Innoson vs GTB matter. I write as a concerned citizen who feels that Nigerians of all tribes are being stiffed through a monopolistic cement pricing collusion  spearheaded by privileged Nigerians against the rest of us as it obtains with several other products and services and condoned by the government.

And as a friend asked, “What is the opportunity cost of stifling and killing competition on prices and the economy?” For how long and to what end are we going to continue running an economy operated on built-in unfair  advantages for political cronies whilst shedding crocodile tears on the hardships Nigerians face daily?

Now I know some people who will ask “what is the cost components of local cement manufacturers?” And others who will aver that “the local operating environment distorts local price comparisons” with global templates. And/or suggest that “infrastructure and energy costs and no functional rail system to move finished products to consumers and the overreaching foreign exchange rate could be the possible reason for wide difference between local and international prices”. The latter set and their co-travelers on the road to burying the citizenry alive will use this as an angle to rationalize the untold hardships imposed by our privileged oligarchs who bite the rest of us daily with their iron mouths.

We all know that the local operating environment have inputs into cost. A major part, however, of the cost components of production is wages, of which Nigerian employers, including cement manufacturers, pay some of the lowest in the world.

I doubt that the operative economic environment is the sole determining factor. Else the recently published indices on improved ease of doing business loose meaning. To my mind, the uniquely Nigerian type of barefaced capitalism fueled by unbridled greed and reinforced by a permissive environment of zero price controls and government’s tacit approval in exchange for bribes disguised as campaign funding or directly into the the pockets of public officials are largely responsible for the extortionate prices since 2015 as most cement components are locally sourced. We saw this play out in the MTN bribe-for-fine-reduction saga. When you use claims of generating employment to get pioneer status, tax waivers, a fistful or regulated Forex at concessionary rates and to garner other unfair advantages, pay poor wages whose purchasing power has been mostly eroded by inflation and still waylay the people with extortionate prices to collect back with the left hand and at high interest rate all you had given with the right hand, what you are practicing is fraud and modern slavery. You may not be flogging and lynching your victims as happened for centuries in America by which that nation grew its financial capital and became a global superpower or like we recently saw in Libya, but you are of same mentality and/or stock. Pious pretensions a la puny CSR or so-called philanthropic foundations will not deodorize your stench of slaver. Our captains of industry smile to the banks with teeth dripping our blood while we bleed to coma or death.

The same oligarchic monsters that an activist presidential aspirant calls Cabals operate in the infrastructures sector too, with a ‘lootocratic’  consortium and Special Purpose Vehicle (SPV) called Nigeria PLC. Because they must “eat from all sides of the mouth” and still have leftovers for twenty unborn generations, they sabotage our economy and national development aspirations for their profits and “ensure the masses never get a fair deal anywhere”. The government meanwhile plays ostrich.

But what do the people do? We endure and sacrifice. We suffer and we smile. And we defend and eulogize the profiteers and racketeers, and we worship our sundry oppressors. We draw and flash the ethnic and religious cards to justify our endless exploitation. And we shift and adjust to accommodate whatever other punishment they inflict on us for our docility and jump at whatever crumbs they throw at us. Between now and March 2018, we will start rewarding them for their ‘exploits’ this outgoing year, with awards like ‘Best Corporate Governance-Compliant Company of the Year 2017’, ‘Best Business Leader of the Century’, ‘Most Profitable Entrepreneur of the Millennium’, etc.

In the end we are all suckers. The complicit government that allows capitalist sharks to devour its people, its oligarchic chronies in business that foist brutal monopolies and the hapless people that are forced to pay with their lifeblood for ‘essenco’. All are trapped in the grand fuckery and fleeting illusion that life is, since like it or not, we will leave all we acquire or impose on others behind, be it poverty, power and/or profit. In the end we are all powder, like the overpriced locally-made cement we buy and sell, and dust.