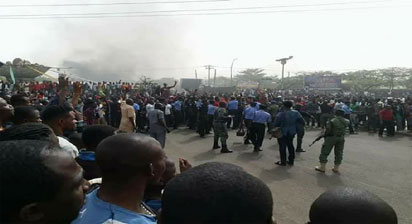 Makurdi, the Benue State capital was on lockdown, yesterday, as thousands of youths took over the strategic Wurukum roundabout and Makurdi Lafia Road in protest over Tuesday’s attack on Benue communities by suspected herdsmen, which left over 50 dead.

This came as the Benue State Police Command said it had arrested eight herdsmen in Guma and Logo Local Government Areas of the state in connection with the massacre.

The protesters numbering over 3,000, stormed the major roads as early as 8 a.m., in a peaceful protests that led to gridlock, as thousands of motorists were stranded.

They, however, went wild when they saw a car conveying about six bodies from Guma council to the BSUTH morgue.

The irate youths, who sang war songs demanded President Muhammadu Buhari’s resignation, if he could not address the herdsmen menace in the state and the entire country.

The protest turned violent when Governor Samuel Ortom alongside members of the State Executive Council tried to prevail on the youths to remain calm, with a promise that the matter had been reported to the President, who also promised to intervene.

At that point, the youths demanded that the President should address Benue people over the killings and when the governor tried to prevail on them to show understanding, the protesters became unruly and started throwing stones and sticks.

Security operatives had to whisk away the governor from the scene to safety.

Reacting to the development, Governor Ortom appealed to the Federal Government to immediately arrest the leadership of the Miyetti Allah Kautal Hore over the killings.

He said: “The president and secretary of that group had threatened to invade Benue State, they have made good their threat. I am accusing them directly, they should be arrested, there are no sacred cows in this country if we all must be seen to be Nigerians.”

The governor, who also disclosed that more bodies were being recovered from the bushes in the affected communities, pleaded for calm, stressing: “I feel the pains of my people and that is why we have this kind of situation but we must not allow our anger to linger.”

Meanwhile, the state Police Public Relations Officer, Mr Moses Yamu, in a statement in Makurdi, yesterday, said “eight herdsmen, six in Guma and two in Logo, have been arrested in connection with the attacks.”

He added that the command had made additional deployments in the troubled area to forestall further attacks and restore confidence of the people.

Yamu stressed that the situation in the two local government areas had been brought under control while investigation was ongoing.

Rev. Leva said if the President had not remained mute over the threats by the herdsmen to invade Benue State, the massacre in parts of the state would have been averted.

He said: “The church is saddened by the renewed attacks on Benue people by the Fulani militia, the action is a Jihadist agenda against Benue people. We blame the Presidency for the attacks because several letters had been written to Mr. President on the issue of threats of attacks by Miyetti Allah Kautal Hore but none was responded to.

“If the President could quell the Boko Haram and Biafra agitators, why has he continued to keep silent on the herders menace.”

He noted that the attacks were a materialization of the threats by Miyetti Allah Kautal Hore, which openly rejected the implementation of the Open Grazing Prohibition and Ranches Establishment Law.

In his reaction, the Muslim community through Alhaji Abubakar Dankeji, Senior Special Assistant to Governor on Community Relations urged President Buhari to urgently intervene to stop the killings in Benue State.

Dankeji said: “Honestly, we, the Muslim community, are not happy over the killings. In the last one month, we have been organising people in various mosques to pray for this government. We will not accept people coming from other places to cause chaos in the state.

“The governor is trying, the grazing law was enacted for peaceful coexistence between farmers and herders. The governor gave the people the law because they demanded for it in order to ensure peace.

“A human being should not kill a fellow human being because of animals, it is unfair, the President has to act fast to stop these killings in the interest of the generality of the people.”