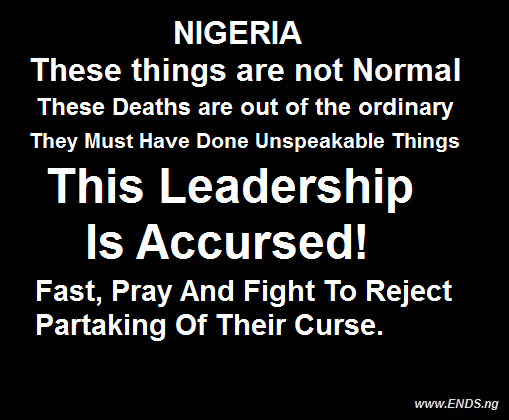 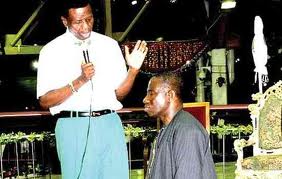 We are a traditional people. We are not Oyinbo. We understand the portents. We know of evil and spirits. We know of God and the devil; of angels and demons; good and bad Jinns (Genies). Forget all this democracy and politics jargon that we keep repeating to imbibe the curse (God forbid). Shall we use those words to ignore what stares us in the face as a clear curse? Abominations upon abominations in clear manifestation? There is no democracy in the Bible or the Quran. There have been good leaders who were soldiers and bad leaders who were soldiers. There have been good civilian and bad civilian leaders. Our leaders are simply a manifestation of ourselves, the better of us, the poor of us and the evil of us, those of us who visit shrines and perform occult rituals.

You know it. I know it. This government is cursed. They have offended the Protector. They have done abominable things, things that cannot be spoken of; things that cannot be imagined. Their ascension to power is not ordinary. Precious blood was shed. Sacrifices made that cannot be imagined. It is not luck; it is the visiting of shrines in the dark of the night. It is the sacrifices made that we cannot mention, precious lives slaughtered, buried alive to pave an unusual ascension to power.

Nigeria is under siege. We are a nation under a curse. We can no longer deny this. The killings everywhere, the meaningless killings; these things indicate that God is not with us. The devil is manifesting in this nation.

A nation where dead, detested tyrant dictator killers and thieves are given awards! What can cause such a thing? Where murderers of our beloved are freed from jail? See they give terrorist killers life-sentences instead of death when clearly our Good books, the Bible, the Quran tell us killers must be killed. A leadership like this that rejects the ordinances of the Holy Books and patronizes killers and protects sponsors of terror is certainly a leadership of non other than Lucifer, the cursed one. What is the reward to us for accepting such abominable acts? How are we all being punished when we know the politicians that have killed thousands of us and we celebrate them, torn by tribalism, we support and cherish politicians we know killed our brothers, our sisters, our fathers and mothers. Politicians we know who sponsored terrorists to bomb our Churches and Mosques. Do you think the spirits of the dead, the souls of the departed, massacred by politicians and this government we know are pleased with us who laugh on their graves and do not revolt for justice to be done?

We are partaking in the curse of the leadership (God forbid). This is more than ordinary. They collect money from 6.5 million of our youth to gather 500,000 of them together like fowls and sacrifice some of them. We again will not avenge the dead right? We will rejoice and tolerate this government right? We are afraid to die fighting, but we are dying faster being afraid and not fighting, and inheriting the curse of this leadership; inheriting the anger of the Lord on this leadership. Will we again not avenge the deaths of the 23 youth sacrificed so our leadership can satisfy their insatiable greed? We will again defend the thieves who we say are ‘from our clan,’ right? Knowing full well that the stealing is why our people are dying.

Do you notice that this leadership cannot be satisfied? They steal 20, 30, 100 billion dollars; triple the nation’s budget, but it is not enough for them. They have run the nation dry, now they wish to remove fuel subsidy which gives us ease, but they will not remove kerosene subsidy which punishes us and from which they steal millions of dollars every day. They are not worried. They steal desperately like ravaging wolves. They steal from the oil wealth before it reaches Nigeria. They steal from it when it reaches Nigeria. They steal in contracts when it is being spent in Nigeria, and then they steal again from our pockets with scams and schemes like the Immigration recruitment scheme, like the tokunbo car ban scheme, like road use taxes scheme, like privatization schemes. They steal and exploit us with over priced oligopolies like cement for which we pay triple the global cost, like GSM/internet. They are not ashamed; they are not embarrassed because they are overtaken by the demons. No normal person can operate like them. No normal human being will be so desperate to steal as they do. This is not ordinary. These people are possessed. But my fear is for us, because as we live under this curse, as we tolerate this curse, we will continue to suffer and die under this curse, disgraced and denuded.

This nation needs fasting and prayers. This nation needs cleansing. Very, very bad things have been done. The living and dead have been offended beyond measure and redemption. Killers are the leaders of the nation, celebrated and defended. There is blood in Aso rock. A heavy black curse hangs over this nation. Death, death, death everywhere. Terror, kidnapping, piracy, poisoning, corruption, greed, wickedness, violence. Nigeria is begging for a good man who will put an end to these witches in power and purify the land. Nigeria cannot wait till 2015. Too many have died, are dying and too many more of our precious lives will be lost before then.

We have forgotten Yar’Adua, Idiagbon, Azazi, and the thousands of innocent heroes killed in and for the establishment of this terror, but we dignify these senators, these executive killers who free terrorists and celebrate Abacha. We are not peace-loving people; no we are vampires. We have partied over the graves of sacrificed brothers and sisters, fathers and mothers. We have laughed and voted for governments that killed our fathers. This is not the dictatorship regime where they imposed themselves on us and we could be forgiven for not being able to do anything being subdued by guns and boots. We voted for Obasanjo, despite knowing who he was and where he was coming from. Fela turned in his grave when we did so. And of course, the curse has increased on us. It was no accident that Yar’Adua died or was killed in office. Why and how did we vote for a leadership who were already confirmed robbers, and militant terror sponsors? Proverbs 29: 24: “Whoso is partner with a thief hateth his own soul: he heareth cursing, and bewrayeth it not.” How do we as a people, publicly profess support of these government thieves in rejection of our faith and acceptance of their curse? We the people have offended the memories of the dead, the killed. We have offended God.

May the souls of the departed rest. May their families have the fortitude to bear the loss. May their deaths not be unavenged. May the curse be removed from this land. Aso rock must be sanctified or perhaps abandoned all together. It is a house of abomination. I rebuke the curse. I fight the cursed.