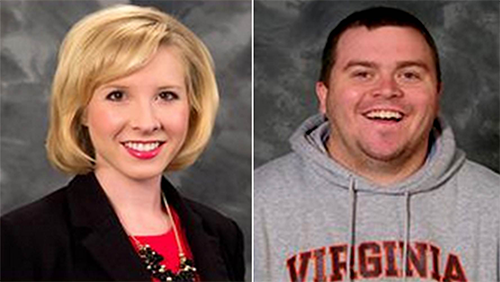 Two television journalists were shot and killed in Virginia on Wednesday morning while conducting a live television interview, their station, WDBJ7 said.

The incident occurred during a live broadcast in Bedford County, when shots could be heard, sending the reporter and her source screaming and ducking for cover.

During the live broadcast, shots and the reporter’s screams could be heard, and the camera fell to the ground.

The station said that journalists Alison Parker and Adam Ward died in the incident.

Media reports said Parker and Ward were filming a feature segment for the morning news programme at Bridgewater Plaza, a shopping and recreation plaza.

“We do not know the motive, we do not know who the killer is,” Jeff Marks, the station’s General Manager, said on air.

A certain former station employee, Vester Lee Flanagan II aka Bryce Williams who was the suspected terrorist, shot himself after police pursued him.

He was reported fired by the station after being taken to the HR by the cameraman. He was envious of the reporter Alison Parker who also just got promoted.

Vester Lee Flanagan II is in critical condition but alive.