When an Ijaw man is born, rumor has it that he is thrown into the river for some time, to see if he can survive in life and eke a living on top of water; this I believe must have been the case with President Goodluck Jonathan. Makes you wonder…

How else does one describe a man who left the criminals to pursue his silhouette if not a weakling? What manner of man would leave the fire he’s supposed to quench and run to get his bathroom slippers … a coward? Such man deserves all such type of names calling under the universe. I hate insulting my country’s president, but he really leaves me no choice here.

Just in case you are wondering what is going through the minds of Nigerians at this moment; I will tell you. This is what we mean: What creature of a president will leave the indicted ministers to sack majority who are not burden to Nigerians?

When I heard the rumor last night of an impending cabinet shake up…sorry, this is not a shake up, since there was no reshuffling done, but a sack, I had expected the seven (7) most hated Nigerian Ministers to be in the list, but the fisherman from Otuoke out of fright could only sack one of such in the person of now former Minister of Education, Ruqayat Rufai, leaving the most wanted five in the cabinet.

Nigerians have never complained about the ministers in Foreign Affairs, National Planning, Environment, Defence, Science and Technology, Land, Power (State) and Agriculture (State). Truly, we have not seen the need to cry blood over Zainab who was only a junior minister of power when Professor Nebo who should be sacked is there, though we agree that she has just been a bench warmer in the Federal Executive Council (FEC), without her people from Niger State feeling her impact. How has the issue of land and environment affected us, when we have commissioners controlling these ministries in our various states? It hasn’t.

It wasn’t Buka Tijani who introduced the failed GSM phones for all farmers, but his senior counterpart; so why sack him? Beside, with or without these ministries, our grandparents in the village have been feeding the nation. So you see, the sack doesn’t affect Nigerians. How about the ministry of Science and Technology, headed by Ita? Honestly, I don’t recall any announcement by the President that a Nigerian must reach the moon or space as part of her centenary celebration, which Ita failed to carry out. Neither do I recall his ministry being the cause of Nigerian Students failing woefully in Science and Technology exams and competitions.

Come to think of it; have we seen any need to blame the minister of foreign affairs for any foreign misdeed? Or was he the one that asked the Delta born Nigerian Judge in Gambia to demand for bribe? Certainly No! A Foreign Affairs ministry begins from the top leadership which Jona currently holds. Hence if there is a failure of foreign countries turning us down when we request for our prisoners to be brought home for trial or their maltreating of Nigerians in their countries; Uncle Joe should take the blame.

I truly do not understand the removal of defence minister, Olusola; just when we are beginning to see bombing reduced in the country. These sacks do not just make sense. When I wrote “ASUU STRIKE: I DOUBT PRESIDENT JONATHAN DOCTORAL DEGREE” last week, I had recommended the Education minister’s sack for incompetence, and today she has been sacked! Her sack alone is the only one that Nigerians dare to say is justified.

This is where the story of the real people who deserve to be sacked should begin. Does he really operate this way, every-time, all the time, or is he just messing with our minds? 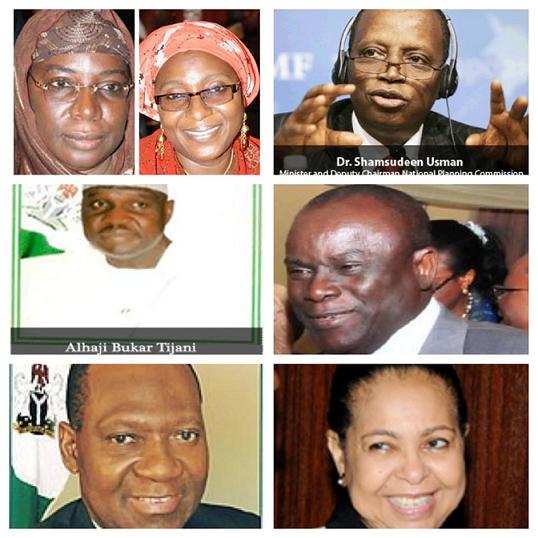 What is President Joe thinking when he left the most notorious of them all, Alison Madueke (Minister of Petroleum) in the cabinet? Her continuous stay in the administration makes mess of all that Jona stands for. In our satirical write up on him titled “BREAKING NEWS; PRESIDENT JONATHAN SETS TO QUIT: HIS RESIGNATION LETTER LEAKS”, he has merely confirmed that he has sworn an oath with his chi to sink or swim with his favorite female minister, whose corruption files are with the now rested NEXT newspapers. Let her be sacked.

Here comes the failed minister of God, who doubles as minister for Niger Delta Affairs, Elder Orubebe, who has come under heavy corruption allegations, which can be substantiated with facts. What am I even saying? Has Dino Melaye and his anti corruption groups not brought facts to the public, yet his kinsman from the creek turn deaf ears? A man who has been battling with the East West road since he came on board does not deserve another stay in office. Mr. President; this is the man that deserves to be extinguished from the cabinet, not Ita Okon.

Your love for crooks is not in doubt, dear President, but we do expect you to have honor in your dictionary. Your sacking the minister of Education is not unconnected with her inability to resolve the ASUU crisis. If this is so, what is the minister of health, Mr. Onyebuchi Chukwu, who got his Prof. Title fraudulently seating comfortably in the ministry doing? Didn’t his ministry experience strike which left many souls dead? What is good for Peter is good for Paul. Onyebuchi exit is long overdue and keeping him longer is to risk the lives of Nigerians. A man whose medical colleagues have recommended his sack long ago is a risk too much to take. Joe, let him go. I recommend the Amazon, Dora Akunyili to be brought in.

Here comes your love for political ‘thuggery’ and favoritism. Don’t tell me that after the entire political crisis in Rivers State which was engineered by your minister for education (state), Wike; you still left him in the cabinet. Honestly, my heart bleeds for you and the weakness that you were born with. I refuse to say you didn’t suck your mother’s breast milk well, but that is what it looks like. Wike who left his ministry and began fighting your supposed enemy, Rotimi Amaechi ought to be confined to political dustbin were you not a weakling. It’s not too late to push him off the cliff, for we are waiting.

Who ever thought that the Federal Capital Territory (FCT) minister will not survive this slaughter of yours must be living in Alice Wonderland. I didn’t hear his name during the rumor of your then pending cabinet sack, but Nigerians do know that he is not a good material for leadership. What role has he played in making the FCT better, apart from taking land from Turaki Yaradua and giving to Jesus Christ of Okirika? Bala Muhammed is like a rotten fish in a soup and should be thrown away. Let me take a guess; you left him so as to complete the job of imprisoning Desert Herald Newspaper publisher, hence killing the much awaited “rot in FCT” book; a book which when released to the public will indict you Jona and your wife. Don’t worry; just sack him and we, Tukur Mamu colleagues will tell him to erase your name from the book. Of a truth, I do not know where to place the imperialist minister of finance and coordinating minister of economy, Ngozi Okonjo Iweala, who happens to be my kinsman. But I do know that she has not benefited your administration. If she is not advising you to remove fuel subsidy, she is fighting Shuaibu or telling you not to release money to ASUU. She has turned you into a pawn in her hand using her economic theory voodoo and deceiving you and your likes that the country will go broke if ASUU is given a meager #87 billion, yet she allows you to pay her and her colleagues whooping amount of money as salary, plus the looting taking place under her nose. She has the interest of the West at heart dear president and, such person should not be retained. Please terminate her appointment!

You love praise singing and sycophantic ministers, no wonder you left the parrot minister of mis-information, Labaran Maku. It is no longer secret that he is gunning for the governorship of Nasarawa State and he needs billion to prosecute such ambition, but must Nigerians suffer because of one man ambition? Maku has not merited his appointment as your trumpet, and by the way, hasn’t Reuben Abati and Doyin Okupe taken over his Job? Is Reno Omokri not doing the same information job? Nigerians who are the ones are paying his salary no longer needs his services and they want him fired. Will you be bold enough?

The sack of the nine ministers with the exception of Ruqayat Rufai is merely beating about the bush. You have not done anything surprising or heroic; instead you have clearly shown how weak you are by leaving behind the real culprits to pursue suspects. You may not know it but your weakness and lack of decision has just been confirmed to Nigerians. Oh what will your children say when this day is recounted to them?

To the sacked ministers who saw themselves as Alpha and Omega, untouchable and invulnerable; it has dawned on you that power is ephemeral, fleeting and transient, a wind that blows to any direction. You felt like lords when talking to Journalists, even screamed at them whenever they call you on phone for explanations. You felt like the king of the jungle, yet only a pronouncement by a mere mortal like you turned your destiny around in less than 24 hours and gave you the title, ‘ex’, ‘former’ and ‘immediate past’. Such is life for you.

Let the jostling and politicking for the vacant posts begin. After all, didn’t the holy book says; “his post let another take”?