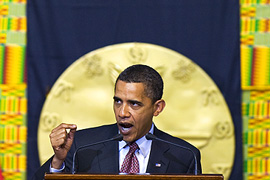 July 20, 2009; NewsRescue- This analysis is from Aljazeera.net on Obama’s speech and  offering to Ghana, his offering contradicting his speech-

People cannot achieve self-determination, if their most basic human right – food – is controlled and determined by others.

This marks a pronounced shift in policy toward food and Africa. Africans, we are told, will now be helped to farm their way out of hunger, rather than rely on handouts from overseas.

And Obama’s message underscored this: “I have pledged substantial increases in our foreign assistance, which is in Africa’s interest and America’s. But the true sign of success is not whether we are a source of aid that helps people scrape by – it is whether we are partners in building the capacity for transformational change.”

This is where I think Obama got his wires crossed or confused. Not because I think his message is wrong; I think the message is to be lauded.

The problem is how he aims to achieve Africa’s “transformational” change which, if anything, is contradictory to his spoken intentions.

I agree with Obama that governance, democracy and good policies are crucial for Africa’s

renaissance. But unless America, and in particular northern countries, change their policies toward African agriculture, then the continent will always just get by, if that!

“Food security” will never lead to African food sovereignty and independence until Europe and America do something about their own agricultural subsidies, which they pour on their own farmers.

For example, Martin Khor, executive director of the southern world-oriented think tank the South Center, found that currently 57 per cent of US rice farms would not have covered their costs if they did not receive subsidies.

Khor also says that, between 2002-2003, rice exports were 34 per cent below the cost of producing and milling the rice. Is it any wonder that even Ghana’s farmers couldn’t compete with imported American rice which has been artificially cheapened because of subsidies?

Ghana was single-handedly picked out by Obama as being a shining light of “good governance” in Africa. It’s a shame he never mentioned what American farm subsidies did to Ghana’s farmers.

Moreover, it is highly unlikely food subsidies will be resolved in the near future as it is these very subsidies that have led to the repeated collapse of the Doha trade round during the last eight years.

But, even if we were to suppose the subsidies issue could be dealt with, will America and Europe open their doors to African agricultural produce? The answer is a resounding ‘No’.

As William Rhodes, senior vice-chairman of Citigroup, writes in the Financial Times: “This new initiative [food security] will fail unless the leading industrial countries open their own markets to a considerably greater degree to food imports from the developing world. Right now there is scant indication that the G8 powers are willing to do this.”

Let’s also, while we are it, ask ourselves another question. Just how did Africa become so seriously dependent on food handouts?

Yes, of course poor governance, poor leadership and wars contributed to this. But Obama forgot to mention in his Ghana speech a more important reason behind Africa’s dependence on food handouts: International Monetary Fund (IMF) and World Bank adjustment policies.

These policies uprooted the agricultural infrastructure that Africa had in place.

IMF policies dismantled marketing boards, abolished guaranteed prices for farmers, removed subsidies on fertilizers and machines and reduced food product tariffs to such a low level that American and European farmers were able to flood the market with their subsidized produce.

That was the real killer blow to African agriculture. And I did not hear Obama apologize for that mistaken and outright destructive “governance”.

And I fear that, until northern countries put their own house in order in terms of changing the policies applied to their farmers – Africa’s food dependence will continue, and it will always be blamed on Africa’s lack of good governance.