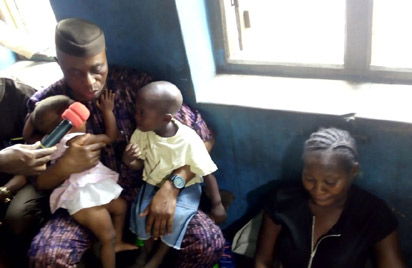 Trouble was averted in Ondo state due to the timely action of governor Mimiko.

The murder of an OPC member, family above, had triggered plans by OPC members to murder Fulani. Vanguard reported:

The death of the OPC member created tension. In the state as other members of the congress planned a reprisal attack on fulani cattle rearers in Shasha areaa of Akure, the Ondo State capital that weekend. Vanguard gathered that the foot soldiers within the group have been mobilized from across the council areas of the state and several meetings have been held.

They were to strike the following day but their meeting was leaked to the governor, who swiftly moved in to douse the tension. Security reports had it that the intention of members of the group was to retaliate by killing at least five herdsmen and not less than fifty of their cow after which both parties can then resolve to bury the hatchet.

But the timely intervention of governor Olusegun Mimiko, who pleaded with the founder of the group, Otunba Gani Adams to speak with his ‘boys’ not to turn the state to a theatre of war averted what could have been a bloodbath and invariably an ethnic battle in the state.

A detachment of policemen were immediately deployed to the Hausa community in order to prevent a breakdown of law and order. Otunba Adams immediately summoned the leadership of the congress in the state to a meeting where he pleaded that the killers of Ayodele should be fished out and made to face justice.