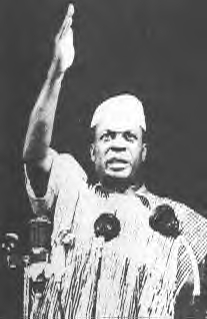 The difference between Kwame Nkrumah and Jaja of Opobo before him was that one tried to first build a Continental while the other tried to build an Economic independence. The Rooted Threats were knocked down. Man needs certain amount of money to live a simple decent life. How much is enough after that is subject to individual goals and wants not needs. People that are obsessed with growth and realization of a nation or people are not driven by money but motivated by self-esteem, actualization, freedom and independence. Not foreign glitters.

We have lost focus and political will to put our house in order by shopping for foreign forms of governments and economic theories knowing full well that our crooks would find loopholes on how to defeat their goals. Every form of government has failed us because we are not sincere. Our service in the government is based on how we can exploit the system rather than what we can contribute into it. Once we are caught defrauding the people, we raise hell: ethnic backing.

In a cultured community, anyone living above his means or salary is enquired to explain source of his riches. It is not about aggrandizement but how to take folks out of subjugation, poverty and suffering into a nation, as a country or continent. Only very few would believe that after Jaja of Opobo and Independence later, the chain of Africans economic dependence remained unlock. Ironically, the keys to the chains are not in the hands of our colonial masters but in the hands of African puppets whose taste and selfishness indebted us, draining African resources.

Honesty starts in each home. When kids bring what does not belong to him, the parents return it and make him face the consequences. When parent ignore their tempted children, they train them how to steal, as pen and armed robber. As constituencies put pressure on their politicians to bring home the national cake home, they are encouraged to loot, no matter whose or where it belongs. When we sing and anoint ill-gotten gains, we inspire them to live above their means.

So celebration of corruption with impunity has no consequences and no anger from the people. It’s the first time in the history of Africa that people so marginalized, disrespected and rendered impoverished by their politicians would rather run out crossing deserts and sea than stand up and fight their oppressors. Africans fought on land against slave masters; they fought inside the slave ships and in the seas to regain freedom. But they cannot fight their oppressors at home.

It is so bad, the court of law seldom convict looters at home but the same looters are convicted abroad for similar offences! They do not care how much of their loot is lost to foreign bankers as commissions, to lawyers as fees and to sussies or donated to universities abroad. They make sure they steal enough to pay everyone off at home and abroad. Their desperation is so severe, they are willing to risk getting caught for money laundering and thrown into jail but not as our poor African children that are willing to risk deserts and seas to reach grim realities abroad.

Africans have been divided into at least two groups. One of the groups are willing to drive a hot shaft through their mothers’ ass to obtain foreign goods and services. They have good reasons, such as their country or continent is not an island and must live with the rest of the world. We must also be open to ideas as part of the world community and not regress back into dark ages. So whatever it takes, we must pay. After all, they have enough looted to pay for grandchildren.

Most in the other group are willing to sacrifice since they do not have as much to lose as their counterpart to begin with and they have been suffering no matter which party is in power. They have never made enough money to purchase exotic cars, houses at home or abroad but groan when taxis, buses, molue and okada increase their fare to meet increasing expenses. They have been listening to different economic theories, none of which had relieved their pains.

If you belonged to the first group and life is good, there is no reason to change business as usual and expose yourself to pain and suffering. You want to be part of world community and send your children to the best schools in the best country, no matter how well they are or not tolerated there. They may not even come back home. Oh, they may come back for grandpa’s burial. So all the dogo turenchi we invested in have no effect on you, your children or country.

Another group comes from both of the above two groups. They are ideologues, children of Lumumba, Nkrumah and Nyerere whose economic theories have been truncated in the past. These are people that are going to leave us stranded in the middle of the Red Sea allowing the ancient Egyptian soldiers to catch up with us or allow the sea to destroy us. They see the light at the end of the tunnel but we see darkness. Always telling us to sacrifice. For rest of our lives?

They call our friendly foreign investors vultures because they want to repatriate cash profits from their paper investment that never add value to industrial growth but give high returns to the shareholders on Bond and Wall Street. They call us emerging market where they can sink their pensions, hide their home profit from their governments and us. In fairness to them some are manufacturers that cannot import their machines, labels, sugar, water and technicians.

We have a bunch of robbers and traitors willing to sell Africans for foreign printed papers called promissory notes in exchange for our resources. It is worse than our great grandfathers in those days that sold gold in exchange for mirrors. There is no difference between manmade mirrors of those days that looked like miracles and manmade gadgets of today. In another fifty or more years, price of TVs, IPods, exotic cars, plastics, nylons, avian water, toothpicks will be as mirror’s

Our known obsession for readymade foreign products, new or used, is unprecedented. Avarice and deep seated inferiority complex to acquire properties in foreign lands, where we patronize and pay their taxes while dodging the same at home, send our children to their schools, donate looted funds like drunken sailors to their universities while neglecting ours at home, is unheard of in any land that desire progress. Never had indigenous African standard theirs is always ours.