“We have created our own billionaires since 2015 from foreign exchange subsidy,” the emir said in a speech at 15th Joint National Council on Development Planning meeting held in Kano… “They got the dollar at N197 and price their goods at N300… For instance, when the CBN was selling dollar at N197 and people were buying at N300, if I sit down in my garden and pick up my phone I would have enough people to call in the industry to get 10 million dollars at officials rate and sell at N300 and make a profit of over N1bn and if I do that four times in a year, for doing nothing I would have earned N4bn.” [Emir SLS II DailyTrust]

Canvassing for the devaluation of the naira to approach its real value and diminish the corruption-favorable gap with the parallel market, the Emir further stated as relayed in DailyTrust:

“And people were telling us that this policy was to help the poor. We should not devalue because if we do the poor people would suffer…People that were profiting from this were the ones telling the government that if you devalue people would suffer; meanwhile they all got the dollar at N197 and price their goods at N300. The poor paid the price of the devalued currency and the rich schemed up the profits and it went on for one year and we talked and talked and talked. If the present administration continues to behave the way the immediate past government behaved, we will end up where Jonathan ended. You may not like it but that is the truth.” [Emir SLS II DailyTrust] 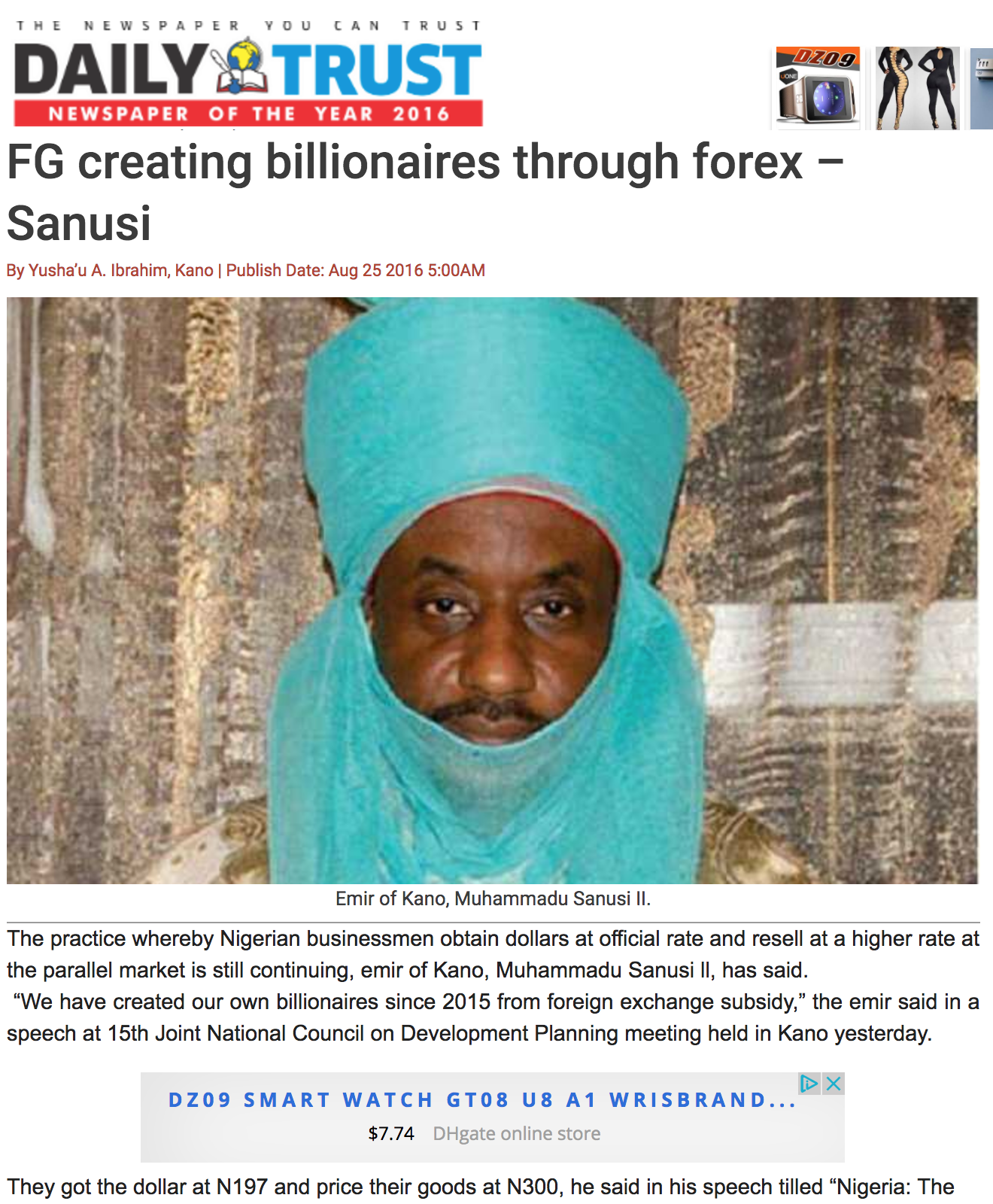 It was an affirmation of a huge problem many of us had complained bitterly about which sat at the epicenter of the Nigerian economic recession. The former CBN governor called it the “foreign exchange subsidy.” I had written strongly about it in April of that year in a piece titled “Like Jonathan’s Subsidy Scam, Like Buhari’s Forex Scam.”

The article introduction read: “The implication of these two government facilitated processes is virtually the same: Nigeria’s cabal benefit and make billions while the masses wither and die.”

Indeed Jonathan’s fuel subsidy scam was no different from the forex subsidy scam that has been run by CBN governor Godwin Emefiele comfortably under the Buhari government. Both processes have had identical devastative impacts to the Nigerian economy while cementing the poor in deadly hardship. According to Reuters, in just a short 11 week slot examined between March and May of 2016, a single cabal, Aliko Dangote got $100 million dollars equivalent of government forex gift via this cabal forex subsidy racket.

Did Buhari know about this racket? It is impossible to tell. No one knows how much president Muhammadu Buhari knew while concerned about his ailment. How much news did his handlers give him and what spins did they put on it. Was he informed about public opinions? It is also impossible to quantify the effect the CBN nepotism scam exposed in a SaharaReporters release had on the president and if this influenced his tolerance of the apex bank governor’s anti-people policies. What matters most is that for whatever reason, under Buhari’s watch the CBN maintained several exchange rates favorable for the forex subsidy scam, until last week that is.

Acting President Yemi Osinbajo has moved to slash the gap between the official rate and parallel market rate by forcing the bank governor to flood enough dollars into the system to offset demand pressure on the black market. Forever more, after an eventual new stabilized level, those who hoard dollars will have fears of Osinbajo’s anti-cabal and pro-people and the economy stance, and the naira can be expected to never again depreciate the way it has been consistently while Buhari gave Godwin Emefiele a free hand and total autonomy.

*President Osinbajo while being the minister of the economy, has operated with hands tied as the CBN governor in the past took no orders from him and as Vice president he had to seek approval from the cabal at the presidency.

A WashingtonPost article praising the Acting President brought to recollection the fact that it was during another similar instance when Buhari travelled and briefly handed over power to Professor Osinbajo that the Vice president ordered the over due recommended devaluation of the naira as SLS II and many analysts including myself had repeatedly urged.

Buhari vented his displeasure about the Osinbajo-directed devaluation when he returned. Clearly while Buhari’s approach was Emfiele’s approach which maintained a wide disparity in the rates of foreign exchange for the privileged and the masses, professor Osinbajo’s economics is the path that prevents corruption and subsidy for the cabal, with the official rate devalued to its actual value and enough dollars in the market to eliminate the forex subsidy gap. With a single rate, foreign investors are encouraged as they can extract their earnings in foreign currency at the same rates they invested it.

Asked about the cabal subsidizing policy and its advantage for the select few, president Buhari shrugged as he told Al Jazeera correspondent Martine Dennis, “those who can afford it can still afford it.”

Hopefully soon, all will be able to afford it on level terms. There is hope.