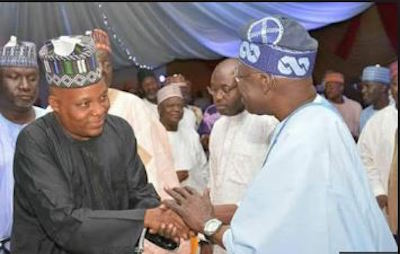 Alleged to be hustling for the VP spot when president Muhammadu Buhari resigns or dies, Borno state governor Kashim Shetitma can be spotted doing unusual things to honor APC boss Bola Tinubu. Here is what he did last week:

We owe our political freedom to Tinubu — Gov Shettima

MAIDUGURI—Governor Kashim Shettima of Borno State, yesterday, said the state owed its political freedom and independence to, among others, the wisdom and sincerity of All Progressives Congress, APC, National Leader and former Governor of Lagos State, Asiwaju Bola Tinubu.

Explaining why his administration named an estate after Asiwaju Bola Ahmed Tinubu, the governor said it was to appreciate him for freeing the state’s APC from ‘tyrants’ who made frantic efforts to hijack the party’s machinery ahead of the 2015 governorship, national and state Assembly elections in Borno State, but was resisted by forces led by Tinubu in favour of the governor and majority of his associates.

The governor’s explanation followed Asiwaju Tinubu’s two-day visit to the state on Monday through yesterday, where he commissioned 432 houses, 13 primary and junior secondary schools and a fully-furnished estate with 26 apartments in five sets of three-storey buildings for medical doctors, named Bola Tinubu Court.

According to him, “for us in Borno State APC, I must confess that we owe our political freedom and independence to not only our firmness, but importantly, to the wisdom and sincerity of Asiwaju Bola Tinubu.

Shettima also paid tribute to Tinubu’s wife, Senator Oluremi Tinubu, saying “Mrs. Tinubu’s humility, kindness, dutifulness and her Africaness all go to reveal one thing, and that is the character of the man she is married to.

“There are exceptions, but generally speaking, most women try to borrow the characters of their husbands; they relate with others based on how their husbands relate.”