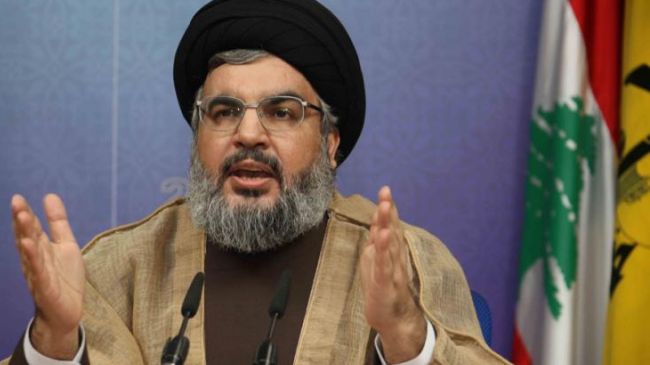 The secretary general of the Lebanese Hezbollah resistance movement says US President Donald Trump is set to officially announce his much touted “deal of the century” within coming weeks.

Addressing his supports via a televised speech broadcast live from the Lebanese capital city of Beirut on Monday evening, Sayyed Hassan Nasrallah stated that the “deal of century” started ever since Trump announced his decision on December 6 last year to recognize Jerusalem al-Quds as Israel’s capital and relocate the US embassy in Israel from Tel Aviv to the occupied city.

The Hezbollah chief noted that some Arab states are inventing religious pretexts to legitimatize Israel’s occupation of Palestinian lands, stressing that the Riyadh regime is claiming that the occupied territories belong to Israel.

“The Palestinian cause relies on regional nations, who will never betray it. The Palestinian Authority must not sign this so-called deal of century by any means,” Nasrallah pointed out.

He then called upon resistance movements in the Middle East region not to give into US and Israeli pressures, describing Trump, Israeli Prime Minister Benjamin Netanyahu and Saudi Crown Prince Mohammed bin Salman as the pillars of the new deal for Palestine.

Nasrallah further underlined that Americans never tend to honor their promises and are not trustworthy in any sort of agreement, pointing to Washington’s recent withdrawal from the 2015 nuclear deal with Iran.

“The United States did not care at all about the interests of its allies when existing the atomic agreement with Tehran. Therefore, peace talks for Palestine will yield no outcome if the US is included,” the Hezbollah secretary general commented.

Nasrallah then made a reference to the recent Israeli missile attacks on the occupied Golan Heights in Syria, advising Israeli officials to stop their acts of aggression or face stinging retaliation.

He dismissed Israeli allegations about the number of casualties and extent of damage in the aftermath of the assaults, emphasizing that the Tel Aviv is seeking to conceal its failures through such lies.

“We dispelled all illusions concerning Israel’s war machine. We undermined their morale and shattered their myth of invincibility,” Nasrallah said.

He finally hoped for positive steps to form the new Lebanese government as soon as possible.