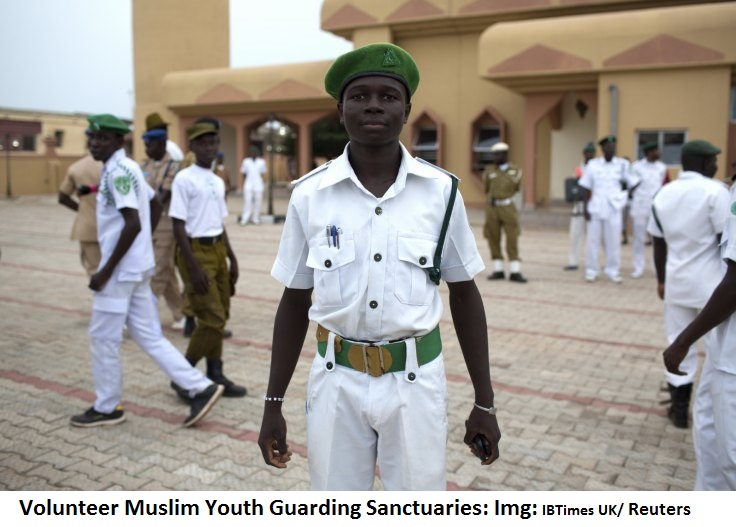 IBTimes reported- Over 200 Muslims youth volunteered to guard Churches for the Christmas in Kaduna.

A cleric in the city, Pastor Yohanna Buru of the Christ Evangelical Church, confirmed that the Muslim youth volunteers had carried out the act of interfaith harmony during his interview with the New Agency of Nigeria (Nan).

“I really appreciate their love and care,” he said of their involvement in the Christmas service.

Buru said that the gesture was one of the first of its kind in the city following a series of attacksperpetrated by the Islamist militant group Boko Haram, who have previously conducted suicide bombings on churches in the central Nigeria state.

The cleric added that the volunteers helped to protect Christians as part of continued efforts by authorities to strengthen ties between the Muslim and Christian communities in the country, which is traditionally divided along religious lines.

According to Nigeria’s Daily Post, Buru expressed his happiness at the gesture and said that it was proof that peace would last between the two religions in the region. He spoke of his hope that other states in Nigeria would emulate such gestures.

For some odd reason which cannot be imagined, the Christian Association of Nigeria under the leadership of controversial Pastor Ayo Ortisejafor recently in the headlines for his private jet being chartered to smuggle weapons money to the tune of 10 million dollars which was seized in South Africa, has denied this well documented event.

The CAN Kaduna head claimed that no Church was under attack. However this contests with reality. Guarding Churches and Mosques as volunteers engage in is to protect in the event of attacks. Only the Military may have intelligence of impending attacks.

The mischievous Press release alleged to be from CAN helped to bolster the terrorists’ agenda and the agenda of those in power who pray for religious strife in Nigeria as a political weapon.

NewsRescue has independently confirmed the youth guarding the Churches.

Nigerian citizens are commended for their brave and altruistic actions and cooperation in the face of terror and mischievous leadership.