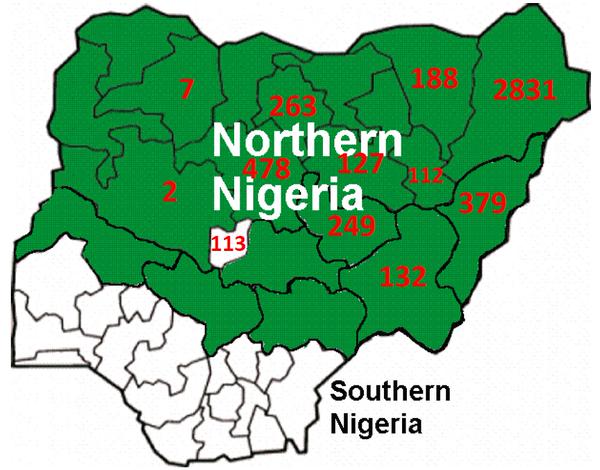 Recent reports have connected a Political arm of Boko Haram as being sponsored to inflame the policy by stoking anti-North and anti-Muslim sentiment in the nation of 170 million.

As elections approach the terrorists have resumed attacks at Mosques and Churches. This has been interpreted as a political strategy to stoke tensions which first began when the President, Goodluck Jonathan accused “northern elements” in the MEND claimed Abuja Independence-day bombing of October 1st 2010. Since then Boko Haram has been associated with stoking up inter-ethnic and religious tension which helps the incumbent hold on to power by creating palpable fear of northern elements.

The chief opposition candidate, General Buhari sued the Presideny spokesperson, Reuben Abati for libel; a case he won after which the President begged Buhari to settle out of court.

CNN reports on the latest bombing:

Kano, Nigeria (CNN) — Several people were injured when a suicide bomber blew himself up outside a church in the northeastern Nigerian city of Gombe on New Year’s Day, residents and a rescue worker said Thursday.

It came only hours after a female suicide bomber was killed outside the Bolari military barracks, also in Gombe, on New Year’s Eve, witnesses said.

The male bomber, who was on a motorcycle, struck outside an evangelical church in the Tudun Wada area of the city around 9 a.m. local time, as worshipers attended a New Year service.

The explosives strapped to his body detonated as he was having a heated argument with church volunteers who had set up a barricade some distance from the church to screen people and prevent any attack by the Islamist militant group Boko Haram, according to Samson Luka, an eyewitness.

“Some people nearby were injured from the blast but none of the injuries are life-threatening,” Luka said.