This is a viral picture of the former Tanzanian Revenue Authority boss, Harry Kitilya carrying a bucket of water in prison.

He has been sentenced for corruption, money laundering and theft of public funds by “the Bulldozer.” See: Tanzania’s President John Magufuli “The Bulldozer” Is Africa Face Of Anti-Corruption, Frugality.

Kitilya and other public figures are involved in a 600 million US dollar bribery scandal involving London-based ICBC Standard Bank…. But who is he waving to, fellow inmates?

This was him before jail: 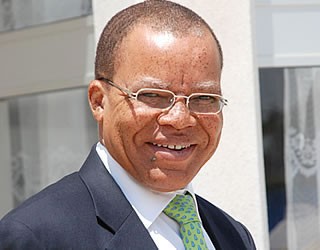 Tanzania’s President John Magufuli is called the ‘Bulldozer,’ because of his tough anti-corruption stance and stellate record from humble beginnings, a former school teacher.

He is the African leadership face of anti-corruption and frugality. Since being sworn in just November 5, John Magufuli has been cracking down on corruption and wasteful spending, he has locked up many corrupt persons in his few months as leader, cancelled an elaborate Independence day celebration and orders the nation to clean up and participates in the cleaning himself.

The son of a peasant farmer, John Pombe Magufuli won the election to become Tanzania’s next president on his 56th birthday, so it is the perfect gift for him.

He was never part of the inner-circle of the governing Chama Cha Mapinduzi (CCM) party, so it came as a surprise to his critics that he secured its candidature for the presidency.

He became known as “The Bulldozer” for driving a programme to build roads across the country.

Those close to him say he is keen on details and when he embarks on an assignment he pursues it to completion.

However, this very trait has cost him friends.

His critics say he is very abrasive, and he received a lot of criticism for auctioning off state-owned homes to government employees and the public.

His supporters say he upholds traditional family values, and he campaigned for the presidency on a platform of hard work.

He performed push-ups at rallies – sometimes with a microphone in hand to refute allegations by the opposition that he was physically unfit for the top job.

Magufuli has inspired a frugality revolution in the nation: