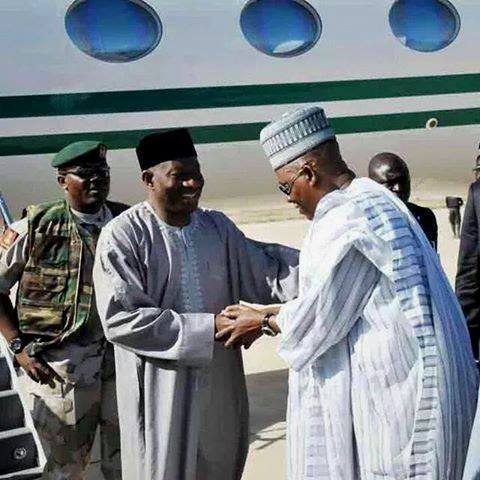 There the president met with troops and the displaced persons where he gave them some tales.

NewsRescue has received reports from Maiduguri that the President of Nigeria, Goodluck Jonathan is planning to visit Maiduguri, Borno state capital.

Borno is the state where Baga town is located where Nigeria’s president is widely criticized for his refusal to comment on or condemn the killing of over 2500 people, in the Muslim town of Baga and environs and burning of 3700 homes; which his government tried to downplay as “only” 150 people killed.

Julius Malema in a televised speech just promised to raise the motion in the South African Parliament for intervention in Nigeria following Nigeria’s leader being “bad luck” for condemning the Paris terror attacks but failing to comment on Nigeria’s worse tragedies. Nigeria’s president has been criticized for ignoring the “#BagaHolocaust” on Fox news, CNN, Time and in other global media.

We also confirmed that the Presidency is in liaison with the 7 Division of the Nigerian Army in Maiduguri who are facilitating his visit. This development has been described as very ugly and unconstitutional as the Governor of the State is the Chief Security Officer and most be informed of visits such as this.

A sincere visit by the president at last would be great after years of abandonment. What the people do not understand is, is the President coming to resolve the internal PDP crisis in Borno State or he is coming to pay eye service to the victims of insurgents in the various ID (Internally displaced) Camps ahead of the upcoming February 14th 2015 presidential elections. Why the visit at this material time and why is the visit not publicized?

If the President is coming to Maiduguri and will not visit any of the Local Government Areas such as Chibok where our daughters were abducted from 10 months ago, Konduga where our brave soldiers are tirelessly working, Bama, Gwoza where the insurgents have hoist their flags and other places, then the President is not welcome to Borno State, people told NewsRescue.