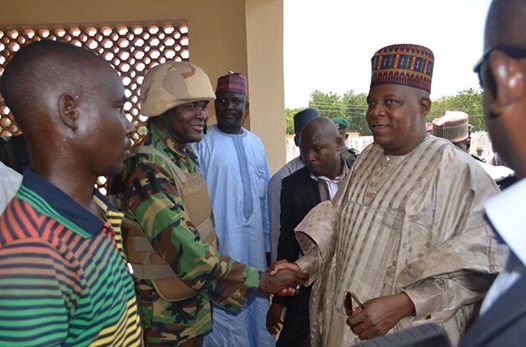 The above is the picture of the brave and talented, blessed commander who led the Nigerian army to its victory over Boko Haram terrorists in the Konduga battle.

Borno State Governor Kashim Shettima paid a special visit to thank him for saving Konduga and Maiduguri, the ultimate target of the terrorists approaching through Konduga.

His strategic commanding of the troops under his command is also responsible for the killing of Boko Haram leader, Abubakar Shekau II.

The serious question however is why the Nigerian army only did so well to protect Maiduguri and will not send brave and skilled commanders like him and employ the same gadgets of the Nigerian army arsenal used to defend the capital, Maiduguri to wage war and defeat Boko Haram in Bama, Gwoza and other territories under terrorist siege.

In these areas thousands of Nigerian youth are being forcefully conscripted to be new fighters to replace the killed Boko Haram members.